Baptism of Fire by Andrzej Sapkowski

The Northern Kingdoms continue to skirmish with the armies of Nilfgaard along the Yaruga. Rumours have reached Geralt, the witcher, that his ward Ciri has been kidnapped by the Emperor of Nilfgaard, who plans to marry her against her will. Geralt, reluctantly, joins forces with a band of heroes and companions to rescue her. 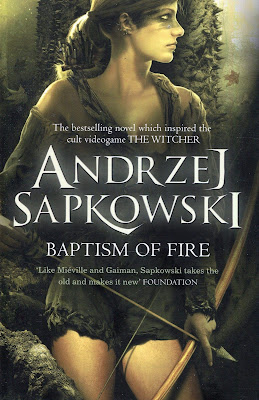 Baptism of Fire is the third novel (and fifth book) in The Witcher saga by Polish author Andrzej Sapkowski, following on from Blood of Elves and Time of Contempt. The previous books established the basic plot: the Empire of Nilfgaard is warring with the Northern Kingdoms and absolutely everyone wants to get their hands on Ciri, the princess of fallen Cintra. For some, Ciri is a political prize, through whom one can claim the vacant throne of that kingdom. Others are more interested in her formidable magical skills. For her former mentors, the witcher Geralt and sorceress Yennefer, they just want to protect her from those who would abuse her for their own ends.

The Witcher books have always been a bit oddly structured - starting with two short story collections before segueing into novels which have felt more like parts of books and not whole ones - and Baptism of Fire continues that trend. From the plot synopsis, you might be expecting a grand adventure in which Geralt traverses half the Continent to rescue Ciri. That doesn't even remotely come close to happening. Instead, Geralt doesn't seem to get more than fifty miles from where he started off, accumulating a bunch of companions along the way. The book then becomes much more interested in exploring these characters and their various personality quirks then in moving the main plot forwards. We do get brief cutaways to Yennefer, Ciri and the political machinations between the kingdoms and the wizards, but mostly the action focuses on Team Geralt.

This has the makings of an entertaining storyline. Geralt's companions include the redoubtable bard Dandelion (aka Jaskier), the nobleman Regis who is more than he seems, the dwarven mercenary Zoltan Chivay, Nilfgaardian turncoat Cahir and the skilled archer Milva. Their adventures include helping refugees, trying to feed themselves and dealing with superstitious peasants eager to burn strangers as suspected vampires. The characterisation of the party is fun and Sapkowski writes some witty banter between the group.

After a while, though, it becomes clear this story isn't really going anywhere fast. Our cutaways to Yennefer and the newly-founded Lodge of Sorceresses, or to various political groups scattered around the Continent, mostly give Sapkowski an excuse to drop huge info-dumps on the political situation. For an author who wrote such skilled, focused short fiction in the first two books in the series, Sapkowski is much less assured at novel-length narratives and becomes embodiment of "tell, don't show." Sapkowski does make some cutting points about the morality of war and how innocents pay the price for the decisions of kings and so on, but by this point these are fairly stock tropes.

As a serialised chunk of a longer narrative, Baptism of Fire (***) is fine. As a novel in its own right, the book doesn't really work, with inconsistent pacing and a reluctance to push forward the main storyline with any urgency or tension. Very solid characterisation and some fun dialogue do keep things ticking over though. The book is available now in the UK and USA.
Posted by Adam Whitehead at 21:55

Email ThisBlogThis!Share to TwitterShare to FacebookShare to Pinterest
Labels: andrzej sapkowski, baptism of fire, the witcher

Interesting review. I thought Baptism of Fire was the best book in the series despite its strange pacing; for me, it was basically what Martin was trying to do in a lot of A Feast For Crows (travelogues showing the horrors and hypocrisies of war) done right.