The Hundred Year War is over. The Avatar Aang has defeated the Fire Lord and restored balance to the world. Fire Lord Zuko and Earth King Kuei have formed the Harmony Restoration Movement, a treaty of peace between their nations which calls for the removal of the Fire Nation colonies settled on Earth Kingdom soil. The newer colonists leave peacefully enough, but in the city of Yu Dao, which was founded over a century ago, there is huge resistance from the population (consisting of earthbenders, firebenders and non-benders alike). Removing the colony would tear families apart. Zuko reluctantly defies the treaty, bringing the two nations to the brink of war once again and forcing Aang to make some difficult decisions. 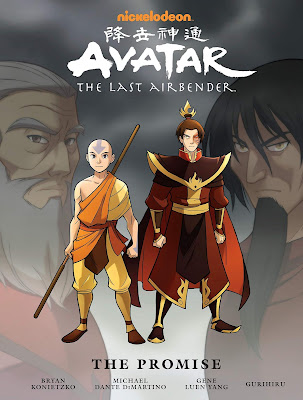 Avatar: The Last Airbender was a three-season show which ran on Nickelodeon from 2005 to 2008. It was, and remains, one of the finest fantasy TV shows of all time. It was succeeded by a sequel, The Legend of Korra, which ran for four seasons in 2012-14 and was set seventy years later, following the adventures of a new Avatar. Although Korra did expand on the fate of some of the original characters by featuring a few of them in old age and having some extensive flashbacks, fans were left wondering on the details of what happened between the two shows.

Dark Horse Comics took up that challenge and reconnected with Avatar creators Michael Dante DiMartino and Bryan Konietzko to tell that story in surprising detail across a series of graphic novels. Six have so far been published (plus collections of one-off adventures) with more in the planning stages. Gene Yang and the art team at Studio Gurihiru were tapped to create the comics and have done a fine job.

The Promise answers that tricky question of now that you've won the war, how do you win the peace? When your're fighting a war against an enemy, especially one who is clearly evil and wants to conquer the world, it's easy to see how to proceed and make plans. When that war is over and you have to bring people back together again, the situation becomes much more morally complex and murky, and tough questions have to be asked and answered. It's the reason why books, movies, TV shows and video games love World War II but generally stop at the end of the war, and prefer not to get into the extremely murky waters of what happened next (particularly the brushing-over of how countries that went to war to stop Poland being invaded by the Nazis were perfectly happy with it instead being overrun by the Soviets instead).

Avatar's strength was always respecting its audience and telling morally complex stories despite the audience being younger. The Promise picks up on this by being an exploration of colonialism. The situation is initially very clear: the Fire Nation invaded the Earth Kingdom and planted colonies along its coast. Now the war is over and the Fire Nation was defeated, it has to remove them. For the newer colonies that have only been there a few years and consist entirely of first-generation settlers, that's fine. For the older colonies that have been there for a century and consist of mixed descendants of the settlers and the indigenous population, the question suddenly becomes a lot more complicated and fraught with difficulties. These people are being told to leave their homes that their grandparents and great-grandparents built, often from scratch, and is that any better than the original colonisation? This point is illustrated when earthbenders and firebenders join forces to defend the colony, to the Earth King's shock.

The graphic novel also cleverly uses Avatar's extensive cast of supporting characters to illustrate the point, putting members of Jet's freedom fighters on different sides of the argument and having Zuko and Kuei at odds. Long-standing questions left dangling from the show are also expanded further, such as the fates of Fire Lord Ozai and Zuko's sister Azula, and also the question of what happened to Zuko's mother.

The book explores surprisingly heavy themes, but it also remembers that this is the Avatar world, so there are also plenty of laughs and lighter storylines. Toph has started a metalbending academy but is finding it difficult to train her students, so Sokka volunteers to help in his capacity as "inspirational bending." Katara and Aang's relationship has blossomed but their constant doe-eyedness is getting on the rest of the team's nerves (and how this is explored, by maturing the relationship sensibly rather than having them break up, is refreshing). Aang also has to deal with a "fan club" of young women who cosplay as him and are constantly excited to hear about his adventures, which is first dealt with as comedy but then becomes more serious when Aang starts to wonder if he can use them to re-found the lost civilisation of the Air Nomads.

The Promise (****½) is a surprisingly weighty, accomplished graphic novel which takes the story of Avatar: The Last Airbender and moves it forward in a way that is entertaining and does not undercut the ending of the TV show, as well as acting as a (distant, for now) prequel to The Legend of Korra. It is available now in the UK and USA.
Posted by Adam Whitehead at 12:33