A salvage operation to a remote world has revealed a devastating secret: the alien Olyix, the supposed friends and allies of humanity, are an existential threat to the human race. Humanity is forewarned, but the Olyix are also aware that their deception has been exposed and unleash their forces. As all-out interstellar war begins, it will take every resource on Earth and its colonies to stave off the attack. Meanwhile, millennia in the distant future, humanity's descendants prepare to mount a last, desperate offensive against the Olyix...but they have some unexpected allies waiting in the wings. 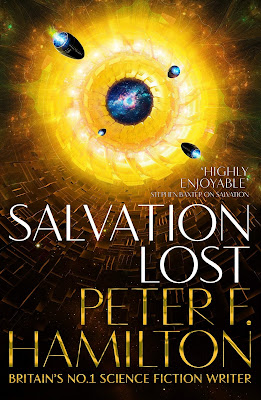 Peter F. Hamilton's Salvation trilogy is Hamilton back to doing what he does best: combining the science fiction thriller and an epic space opera into an addictive narrative set in a richly-detailed future. Hamilton is the finest worldbuilder in science fiction working today - perhaps ever - and his constant capacity for invention and storytelling remains unmatched in the genre. When it comes to big-budget, high-concept, highly readable science fiction there is simply no other game in town at present.

Salvation marked the start of a new sequence and it's familiar territory for Hamilton: painting a picture of a futuristic human society which is suddenly put in peril and a disparate group of characters scattered across many fronts has to respond to the threat. It recalled his two finest novels, The Reality Dysfunction and Pandora's Star, but clocked in at considerably less than half the length of either of those novels, so benefited from the tighter focus. This is Hamilton doing his normal thing but slimmed down a lot.

As with the first novel, this book unfolds on multiple fronts simultaneously. We get to see the war between humanity and the Olyix beginning from the POVs of the characters from the first book and other powerful figures. We also get a continuation from the story of the first book of the far-future humans fighting a war across an almost unimaginable timescale, with battles separated by centuries or millennia and the overall shape of the conflict hard to discern. This conflict, which is more cosmic in scale, feels a bit different to Hamilton's other work and is arguably the freshest aspect of this new series.

A new storyline also begins in this book, with a bunch of low-level London criminals providing a ground level view of the unfolding conflict and how they get more involved in it. I felt this storyline was a bit less interesting, mainly because all of the characters involved in it were morally irredeemable thugs. The attempts at moral complexity - giving one of the characters an elderly and failing relative and showing his plans to escape from the criminal world - aren't handled very well and I ended up not particularly caring about this storyline very much, especially as in a relatively short novel (if only by Hamilton's normal rhinoceros-stunning standards) it felt like page time that could have been spent on the other two, considerably better storylines. Some may also feel that some Hamiltonian tropes are a bit over-indulged here, such as once again the fate of humanity resting with an ultra-rich but ultimately benevolent super-corporation run by a semi-immortal philanthropist.

Still, Salvation Lost (****) is fiendishly readable and compelling (I read it in one sitting), intelligent and features a scope and scale unusual for Hamilton whilst simultaneously being a lot shorter and more focused than most of his prior work. The novel is available now in the UK and USA. The concluding book in the series, The Saints of Salvation, will be released next year.
Posted by Adam Whitehead at 16:51

I also love this book and agree with your comments on the London gang being the weakest part of the book. I have loved all of Hamilton’s book since I picked up the Pandora's Star back in 2004. Since that date I read his entire back catalogue.
I was tempted to read this book in one sitting as well, but, in the end, decided to make it my bedtime book. I'm still getting through a couple of chapters per night. It is a real "page turner"
I have just recently discovered your site and am loving the diversity of topics your cover and the general nerdy stuff that you review.

You read a 500 page hardcover in one sitting??? 😲
Damn! I wish I could read as quickly.