AD 2204. A derelict alien spacecraft has been found on a remote planet. A group of explorers are gathered together to investigate the wreck and the strange secrets it contains. For each of them, it has been a strange and stressful road that has led to this time and place. And, centuries in the future, they are revered as the “Five Saints” for the actions they are about to take… 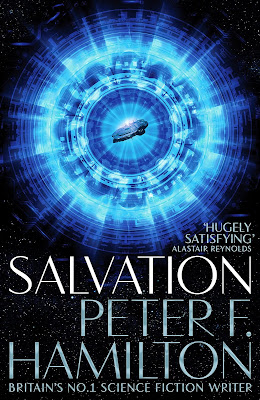 Salvation is the first novel in both a new series and a new universe for Britain’s most successful living SF author, Peter F. Hamilton. It’s also a novel that mixes Hamilton’s well-known strengths – in-depth SF worldbuilding, an epic narrative, the meticulous construction of intriguing mysteries, his skill at both the long-form novel and short stories – with a new approach which splits the story into three distinct strands.

In the first approach, we have the “modern-day” storyline about the gathering of the protagonists (of which there are six; the disparity between the number of characters and the later veneration of five of them is the first clue that something odd is going on) and their deployment to the alien crash site. This story is told in the first person from one of the team and is interesting enough, although it really only serves as a framing device. In the second part of the story we get a lengthy flashback from each character about a key event in their lives, one that also defined who they are but also ties in directly with the over-arching mystery. This section feels a lot like Dan Simmons’ Hyperion (itself inspired by Chaucer’s The Canterbury Tales) and is where Hamilton gets a bit structurally interesting, as he combines the six apparently unrelated novella-length narratives into one story.

In the third section, it’s centuries or millennia in the distant future and the human race seems to be in desperate straits. This part of the story is most baffling, initially, due to a lack of context, but as the story unfolds the reader can start to put together the pieces. This results in impressive foreshadowing.

Hamilton moves between the three plot strands with skillful economy – at 530 pages this may not be a short book, but it’s positively a novella compared to so some Hamilton books (the longest of which are more than twice this size) – building up this new vision of the future. It’s a much less advanced vision than either the Confederation of the Night’s Dawn series or the Commonwealth of much of the rest of his fiction, but it’s still a big, brash and optimistic view. The key invention this time around is the quantum entanglement portal, which stands in for the wormholes of his earlier books. In practical terms they are similar, but they have a limitation in that twinned portals have to be created together and then one of them physically moved to the destination to be set up (it can’t be generated from light-years away). They are also much less energy-dependent, meaning that portals are set up everywhere, allowing someone to commute to work in London from their flat in Glasgow in five minutes. The super-rich even have “portalhomes”, where one bedroom might be in New York City but the bathroom is in Antarctica. It’s a fun concept that Hamilton explores to the hilt.

There’s also a foreboding tone to events. Hamilton is building up to something quite terrible happening between the present and far future storylines, and it’s not until late in the book we get an inkling of what that might be. Of course, the book ends on a cliffhanger just as we get to that point. The good news is that the second book, Salvation Lost, is almost finished already and locked for release in 2019, with The Saints of Salvation to wrap things up in (presumably) 2020.

Character-wise, Salvation probably lacks a figure as dynamic and memorable as Paula Myo, Ozzie or Syrinx, but the Canterbury Tales-style structure does allow each of the major characters to be painted in a lot of depth with their backstories and motivations fleshed out. There are also political and ideological differences between the group, which have to be overcome for them to work out what is going on.

The far future storyline is a lot weirder, with characters being trained to face an enemy who may not appear in their lifetimes, but Hamilton sells the weirdness quite well, even if the characters aren’t quite as engaging this time around.

Salvation (****) is in many ways classic Hamilton: bold, brash, epic, optimistic and packed with great worldbuilding and ideas. It’s also structurally original (for him), relatively constrained in scope and page-count and builds up a terrific momentum which is only arrested by the all-too-soon ending. On the negative side of things, the characters perhaps aren’t among Hamilton’s best and although quantum-entanglement portals may not be wormholes, they are very similar and it does feel like Hamilton is revisiting well-trodden ground here. Still, it’s a compelling, rich SF novel. It is available now in the UK and USA.
Posted by Adam Whitehead at 12:53