If you were planning to watch The Expanse on Netflix outside of the USA, you are now officially out of luck. Netflix removed the first two seasons of The Expanse from their streaming service last week. 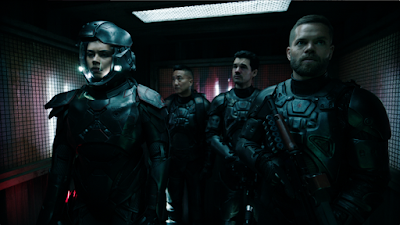 This was expected as Netflix's big rivals Amazon have picked up the streaming rights to The Expanse worldwide, along with the rights to make more seasons after SyFy dropped the show. Production of Season 4 of The Expanse has just started, in fact.

Unfortunately, we don't have a date for The Expanse joining Amazon Video. We assume when it does, it will include Season 3 (which hasn't aired outside of the US and Canada yet) and of course Season 4 when it launches next year.

More news when we get it.
Posted by Adam Whitehead at 19:53

Well I guess we'll get season 3 before season 4 airs otherwise that will be an epic disaster on amazon UK's front.

It wasn't great trying to watch it in Canada where we always got it ages after the U.S.