FitzChivalry Farseer has, reluctantly, re-entered the corridors of power in the Six Duchies. Posing as guardsman Tom Badgerlock, he has been assigned to journey with Prince Dutiful to the Outislands, where the Prince seeks to win the hand in marriage of the Outislander Narcheska, ending all enmity between the two nations. But there are other agendas at work. To win a lasting peace, Fitz must help his prince slay a dragon…and take a stand against his greatest and best friend. 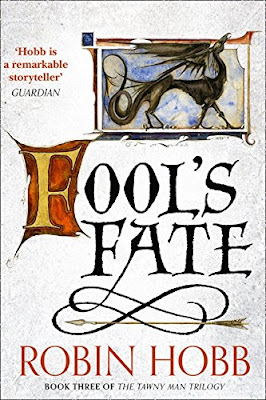 The concluding novel in Robin Hobb’s Tawny Many Trilogy is something I was bracing myself for. Previously, Hobb’s form has been to write an exciting, busy opening volume in a trilogy and then have a slow middle volume which leaves the final book with a lot of heavy lifting to do to end the story, usually resulting in a third book which wraps up the story but with serious issues with structure and pacing. Ship of Destiny deal with the problem somewhat well, but Assassins' Quest really suffered from it. The relatively slow pace of The Golden Fool was also not a good sign.

Fool’s Fate, fortunately, rejects this issue. Whilst you could never call any Hobb novel fast-paced and action-packed, this enormous book (or rather the first two-thirds of this book) comes as close as she gets.

The book consists of a long sea voyage, an exploration of Outisland culture and then an expedition to the island of Aslevjal, where a dragon is said to sleep in the ice. These sequences of explorations on a glacier and survival in freezing temperatures with unknown dangers lurking in the dark are atmospheric and effective, with occasional scares reminiscent of Dan Simmons’ The Terror.

There is then an epic showdown and an appropriately grand finale…which takes place 200 pages before the book ends. The rest of the book is an extended epilogue in which everyone’s fate is revealed and – dare we say it – a couple of characters are even allowed to have happy endings. There is, however, enough material left dangling for both the Rain Wild Chronicles quartet and the Fitz and the Fool trilogy.

As with most of Hobb’s work, and this trilogy in particular, the book is deliberately paced and introspective, with Fitz ruminating on his mistakes a lot. Fortunately, he is also allowed to develop more as a character and even – gasp! – to actually make amends for past mistakes and move forward with his life rather than just moaning about his lot in life. The ending to Fool’s Fate is suspiciously uplifting, in fact, to the point I’m suspicious Hobb is just keeping her powder dry to make things even worse in later books.

There is also a sense of completeness to this book. It addresses outstanding elements from the Liveship Traders books and even finishes off a whole host of storylines left unresolved from the original Farseer Trilogy. The result is a book that works as a finale to one trilogy and an effective epilogue to two others, and is one of Hobb's strongest books to date.

As usual for Hobb, the characterisation is rich, the emotional storyline is impressive and, less usually, even the worldbuilding is impressive. It also brings enough closure to the story to make the trilogy stand alone. Fool's Fate (****½) is available now in the UK and USA.
Posted by Adam Whitehead at 18:47