In a surprise move, Netflix has cancelled their Marvel superhero series Luke Cage when a third season of the show was in pre-production. This comes just a week after they confirmed the axing of sister-show Iron Fist. 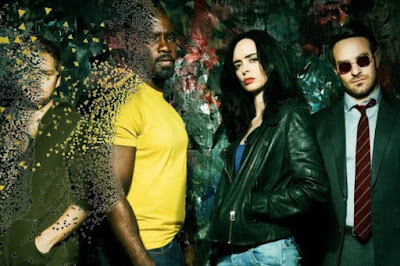 Netflix and Marvel have teamed up to produce six superhero TV shows (Daredevil, Jessica Jones, Luke Cage, Iron Fist, The Defenders and The Punisher). These shows have done very well for Netflix in terms of critical acclaim and streaming figures, although the acclaim has started to drift recently (with the first season of Iron Fist coming in for a particular drubbing).

More of an issue is the fact that Disney (who own Marvel) are launching their own streaming service in 2019 which is seen as a major competitor to Netflix and a much greater threat than Amazon's streaming service. Disney are planning to launch the service with a new Star Wars TV show called The Mandalorian and at least two Marvel mini-series, one focusing on Loki and the other on Scarlet Witch, with Tom Hiddleston and Elizabeth Olsen in talks to reprise their roles from the films.

Although the Netflix-Marvel deal allows Netflix to keep making these shows, the practical business decision of that may not make much sense, since Netflix are effectively producing tie-ins for a rival service. In addition, Marvel (and thus Disney) take a slice of the shows' profits and their sales on DVD, Blu-Ray and so on. Although the Marvel shows started performing strongly for Netflix, their recent performance has been less impressive and Netflix are looking to cut some of their under-performing shows to make way for new projects. On this basis, Netflix gradually shutting down all of the Marvel shows and perhaps looking elsewhere for superhero projects does make sense.

Deadline suggests that this particular cancellation was down to "creative differences" between Marvel and Netflix, with Marvel demanding major script changes and even a change in creative personnel, suggesting that Marvel also does have a script veto, meaning that they may also have the power to effectively cancel the shows (or logjam the process to force Netflix to cancel them).

Ironically, the news comes just after Daredevil Season 3 launched on the service to the strongest critical reception any Marvel Netflix season has enjoyed since the first season of the show.

Jessica Jones Season 3 and The Punisher Season 2 have already completed filming and are expected to air in early 2019. The fate of the Netflix/Marvel shows should become clearer at that time.
Posted by Adam Whitehead at 12:01

Also worth noting is that these shows, at best, suffer from significant pacing problems and, at worst, are terrible. Most of the seasons feel like 90-minute movies tediously extended to go on for way too many episodes. I liked the first two seasons of Daredevil (haven't seen the third yet), and the first season of Jessica Jones would have been amazing if it had been done in 8 episodes. Otherwise, they've managed to take characters I've always loved and figured out how to make me not care.

I think pacing is a problem with a lot of shows in the modern era of stretching a narrative arc over a season or half season. It's not limited to Netflix, but it does become a lot more clear when you watch an entire season in one sitting.

As much as I like many of the shows in the line up, it did seem like something that couldn't go on forever. Disney simply isn't the kind of company to leave a lot of money sitting on someone else's table.