The Obelisk Gate by N.K. Jemisin

A new Fifth Season has fallen on the world, the worst one in history. It may last a thousand years and forever end what vestiges of civilisation remain in the Stillness. One orogene, battered and dying, has a plan to end the Season and indeed all of the Seasons: to recapture the Moon, which was moved out of its traditional orbit more than a thousand generations ago, unbalancing the world. Recapturing the Moon requires that Essun find and harness the powers of the Obelisk Gate. But this may be harder than she thought, as enemies are moving against her new-found home and, in the distant south, her daughter discovers that she herself has an unforeseen destiny. 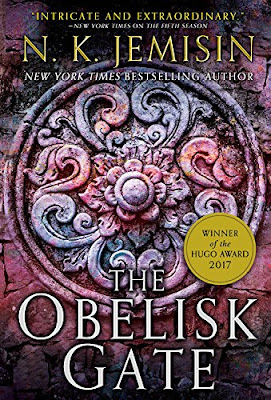 The Obelisk Gate is the sequel to the excellent The Fifth Season and the middle volume of the Broken Earth trilogy, N.K. Jemisin's critically-acclaimed take on the venerable Dying Earth subgenre. The Fifth Season was a highly accomplished novel, describing a brand new world with skill and intelligence and blending together elements of fantasy, post-apocalyptic fiction and a dash of the weird to create something compelling and interesting.

The Fifth Season was also helped by its structure, in which we follow the same character at three different points in her life. The story rotated through each version of the character in term, gradually giving the readers all the pieces to assemble the full narrative. It was a great literary conceit, well-conceived and executed, which allowed the reader to really get to grips with the character.

The Obelisk Gate can't use the same structure, so instead adapts it by moving between Essun's story and that of her daughter Nassun. Whilst the first book was an extended road trip, the second book alternates between Essun's static story and Nassun's long journey across thousands of miles into the far south. This changes things up nicely and means that Essun, now a guest of the community of Castrima, has to actually stay put, learn what's going on from Alabaster and help defend the community.

It does mean a slightly more uneven book than The Fifth Season. Not actually a huge amount happens in this novel, especially for Essun's storyline, and some implausibility creeps in when you realise she is spending months and months hanging around in Castrima (to allow Nassun to travel many, many thousands of miles from almost the equator into the Antarctic region) but doesn't seem to really learn a lot of new information despite Alabaster being right there. That said, there is quite a decent amount of character building and atmosphere here and Castrima, a subterranean city suspended in a giant geode, is a terrific piece of worldbuilding.

Nassun's storyline is more dynamic and disturbing, as her father tries to take her to safety but instead brings her into an even more dangerous and unstable situation, with her own burgeoning powers to contend with. There's a dark mirror here to Essun's childhood upbringing as related in the previous novel, with the feeling that Nassun is what Essun could have become if she was indulged more instead of tortured.

The result is a sequel which expands on the world and the story but, in a common failing of middle volumes of trilogies, can't quite match the relentless pace and sense of discovery from the first book. There's a lot of introspection in this novel which is beautifully written, but risks redundancy later on. However, the book ends with an explosive confrontation between Castrima and a rival community which once again shakes things up and leaves them in an interesting place for the final book in the series to pick up on.

The Obelisk Gate (****½) is a readable and strong sequel to The Fifth Season, if a slightly less original and relentless one. It is available now in the UK and USA. The story concludes in The Stone Sky.
Posted by Adam Whitehead at 20:26