Wertzone Classics: The Hitchhiker's Guide to the Galaxy (BBC mini-series)

Arthur Dent wakes up one Thursday morning hoping for a quiet lie-in and a nice lunch. Instead, his house is demolished to make way for a bypass. This is followed by the discovery that his best friend Ford Prefect is in fact an alien from a small planet somewhere in the vicinity of Betelgeuse and then the entire Earth being blown into a trillion pieces by other aliens called Vogons, who enjoy writing bad poetry. Dent's journey will take him to the end of time, back to the beginning of life and will involve searching for the Ultimate Answer to Life, the Universe and Everything and, when that turns out to be disappointing, the Ultimate Question. His only help on this journey will come from The Hitch-Hiker's Guide to the Galaxy, an electronic book clearly written on a very tight deadline. Fortunately, Dent has friends and allies on this trip and he knows where his towel is. 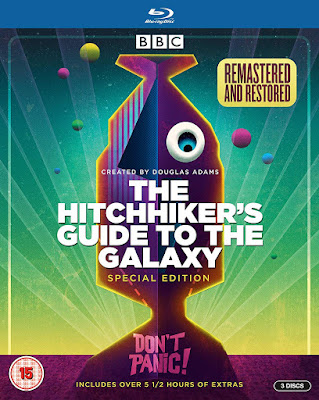 It is often said that Douglas Adams' seminal SF comedy The Hitchhiker's Guide to the Galaxy has no real definitive version: the version each fan considers to be definitive is normally the one they encountered first (unless it's the terrible 2005 movie, in which case obviously not), whether that's the 1978 radio play, the 1979 novel or even the 1984 text adventure video game. But for many millions of fans, the first version they saw was the 1981 BBC TV mini-series. Written by Adams himself, directed by Alan Bell and produced by John Lloyd, it deftly weaves together the best storyline elements from the first two novels in the book series (The Hitchhiker's Guide to the Galaxy and The Restaurant at the End of the Universe) and the first two seasons of the radio series, whilst dropping elements which were less successful.

The result is a - very relatively - tight version of Adams' rambling magnum opus which takes his sprawling story and starts and finishes it in about three hours and six episodes. This modest length (about a quarter the length of your average Netflix season, for example) takes in the birth and death of the human race, asks existential questions about the nature of the universe and almost never lets up, for a second, on the barrage of jokes, quips, elaborate sight gags, puns and character humour. Watching it in 2018, it's an admirable exercise in writing discipline (not a phrase lightly associated with the famously hesitant Adams, who once took eight years to write a book barely 200 pages in  length), worldbuilding and atmosphere.

Of course it has dated, perhaps annoyingly so for the BBC. The Hitchhiker's Guide to the Galaxy cost them a fair amount of money by their standards (certainly far more than they spent on the comparable eighteenth season of Doctor Who, the last one starring Tom Baker, which aired the same year) and the relatively sprawling sets (some inherited from the movie Alien), visual effects gags and, especially, the lengthy and brilliant animated sequences taken from the fictional guidebook itself are all impressive. But there's still a lot of filming in quarries with under-detailed black sets and some decidedly dodgy model shots of spaceships. If anything, the show's transfer to Blu-Ray and resulting digital remastering (alas, not a HD remastering as that's technically impossible due to the profusion of scenes shot directly onto low-res video) shows up some of these problems rather than solves them. But you also have to pause and remember that this TV series was shot almost forty years ago. On that basis, some dated effects and dodgy costumes can be forgiven for a script that is still as laugh-out-loud funny and fresh now as it was then.

Hitchhikers works not because it's a silly, funny story, but because it's a story that poses questions about the nature of the universe, the point (or not) of existence and the search for meaning which we all face at one stage or another. Surprisingly - and very much something that betrays its UK origins - the story doesn't really give any satisfactory or pat answers, Adams noting that he's not going to come up with the answer to such profound musings in a three-hour TV show when scientists, philosophers and telephone sanitation engineers have failed to do so in the preceding two million years. Instead, the show throws some ideas back and forth and has a lot of fun in the process.

Performances are uniformly excellent, from Simon Jones' befuddled Arthur Dent to David Dixon's madcap Ford Prefect to Sandra Dickinson's Trillian (although it's hard not to notice that Trillian is decidedly under-developed compared to the other characters), with a ton of other noted British character actors of the 1970s and 1980s dropping in. Soon-to-be Fifth Doctor Peter Davison has an excellent brief role as an animal desperate to be eaten, and even David "Darth Vader" Prowse shows up to show everyone what he looks like outside of a black mask. There isn't a weak link in the cast, and of course the soundtrack is exceptional from the backing music to the iconic theme tune to the final burst of Louis Armstrong that sees the show out.

The Hitchhiker's Guide to the Galaxy has now been reissued on Blu-Ray, with three discs packed with extra features, including the entire, massive Making of Hitchhiker's Guide to the Galaxy documentary (including new dramatic scenes with the original cast) filmed in the early 1990s. The BBC had huge plans for this show at the time, giving it an impressive sound mix missing from almost all of their contemporary shows, making the series certainly sound far better than it ever has before (helped by a 2018 audio remix).

Unfortunately, the series has a huge problem in that many of the original film elements have not survived the passage of time. Without those, it's not been possible to natively remaster the footage in proper HD. The technical team have managed to moderately improve the quality of both the video and film footage as much as possible (and this is the best the series has ever looked, somewhat better than running the DVD through an upscaler) but there are hard limits on what they can do without the original film elements. This would be less of a problem if the set didn't have "digitally remastered in HD!" on the box, which is something of an exaggeration. Frustratingly, the remastering isn't as good as the recent job that was done on the Season 12 release of Doctor Who, for a season a full six years older than this show. The remaster team were able to recover all of the animated Guide entries and remaster them in HD (thanks to them being stored separately) but they ultimately decided not to mix this into the episodes, feeling it would jar too badly. Instead, the upgraded Guide entries are available to view separately and look excellent.

Technical issues aside, the BBC TV version of The Hitchhiker's Guide to the Galaxy (*****) may (incredibly arguably) be the most concise, focused and successful version of the story made to date, with a relentless assault of ideas, gags and weird and wonderful characters. With the 2005 movie being, how shall we say, "a load of dingo's kidneys", it certainly remains the definitive visual dramatic version of the story to date. It is available now in the UK (Blu-Ray, Limited Edition Blu-Ray, DVD) and will be released next month in the USA (Blu-Ray, DVD).
Posted by Adam Whitehead at 20:14

Email ThisBlogThis!Share to TwitterShare to FacebookShare to Pinterest
Labels: bbc, douglas adams, the hitch-hiker's guide to the galaxy, wertzone classics