The Fifth Season by N.K. Jemisin

In a remote future, the Earth's landmasses have been fused together into a supercontinent called the Stillness. The geological catastrophe which caused this event still haunts the planet, with frequent earthquakes and volcanic eruptions causing devastation across thousands of miles in titanic disasters known as Fifth Seasons. Many civilisations have risen and fallen, with the world currently dominated by the Sanze Empire from its grand capital of Yumenes.

A new Fifth Season has arrived, heralded by the opening of a vast volcanic rift below Yumenes. Chaos grips the Stillness as thousands takes to the roads to flee the devastation. Among them is Essun, an orogene, one who can use the powers of the earth to her own ends. Her son has been murdered by her husband, who has fled with their daughter. Essun sets out to find them, as all around her the world begins to end. 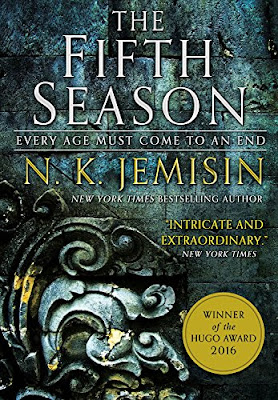 There is a long and honourable tradition of genre fiction set at the end of the world, when confused humans try to live their lives in the shadow of earlier, more ancient and glorious civilisations. Jack Vance arguably became its first champion, with his 1950 novel The Dying Earth and three sequels. This accomplished, erudite, witty yet melancholy series gave the subgenre of fiction its name and directly inspired arguably its most famous work: The Book of the New Sun by Gene Wolfe, sometimes cited as the greatest work of science fiction or fantasy ever written. More recently the Dying Earth subgenre has gained increased fame from Monte Cook's excellent Numenera RPG setting (and its video game spin off, Torment: Tides of Numenera).

N.K. Jemisin's sixth novel fits nicely into this genre: it is, at the very least, tens of thousands of years in the future (possibly millions). Strange obelisks float in the sky for unknown purposes. The ruins of ancient, baffling civilisations lie everywhere. Recurring geological catastrophes seek to destroy humanity, but powerful humans known as orogenes seek to defy them. But the same orogenes who can stop the quakes can make them vastly worse, so other humans - "Guardians" - are appointed to guard them and, if necessary, kill them if it looks like they are going to be come a danger themselves. It's a world of terrible inequality, where people are born into castes and forced to stay there for their entire lives. Selective breeding experiments are commonplace, and orogenes are treated like animals by those who fear their power.

The Fifth Season is thus a novel about many things: humanity and bigotry, history and myth, life and death, and the unquenchable desire of human beings to survive and seek happiness. It's a book that's received a lot of critical acclaim, with the trilogy it opens winning no less than three Hugo Awards and a score of other awards. This acclaim and the book's literary qualities have, paradoxically, put off a lot of readers who prefer their fantasy more straightforward and predictable.

Which is a shame because The Fifth Season is also a rollicking good epic fantasy novel. There's massive and awe-inspiring displays of apparently-magical power. The "magic system" is given consistent rules and treated with as much respect and seriousness as in any Brandon Sanderson book. The worldbuilding is vigorous, original and well-thought-out. There's even pirates, and some nice action scenes on the high seas. There's moments of strange alienation at the discovery of awe-inspiring remnants of earlier ages, and moments of horror at some of the creatures and powers unleashed by the same.

The book's structure is also innovative: the narrative is split into three strands, and we follow each strand with a different character at the centre of it. Each strand is set in a different time period, and as the book continues the characters and time periods converge until the book's ending results in a moment of catharsis: less of a twist ending and more one of simple revelation that makes what you've been reading make sense. Each strand is also told in a different writing style (moving from second-person/present-tense to third-person/past-tense to third-person/present-tense) which I expected to dislike, but instead it worked extremely well. The different writing style acts as a consistent reminder of what part of the story and the timeframe you are reading at any given moment, and transitions did not jar at all.

It helps that Jemisin is one of the stronger prose-writers in modern SFF, consistently nailing great moments of dialogue and deploying formidable powers of description. The book's themes are big ones, taking in ecological and environmental issues, gender relations, sexuality (especially interesting when some of the far-future humans are evolved in some unexpected manners) and inequality, but the book never remotely becomes preachy or bogged down in some semantic political argument. Everything services the world and the story that Jemisin has created.

The book also has pace. This book is 450 pages of relatively big type, and the sequel is even shorter. This modest page count helps move the story along at a brisk clip, with the narrative rotating between its three POV characters like a well-oiled machine, until the book brings its various strands together in a satisfying manner that sets the scene perfectly for the sequel, The Obelisk Gate.

The Fifth Season (*****) is one of the best opening volumes to a science fiction or fantasy trilogy of the past few years, and is strongly recommended. It is available now in the UK and USA.
Posted by Adam Whitehead at 20:32

It's a great book, and I'm currently reading the sequel, which so far is even stronger; One questions: what makes you think it is in the future of our Earth rather than a Fantasy world?

The pre-release campaign I think said it was specifically our world, and the presence of the Moon, the polar regions being called the Arctic and Antarctic and the stuff about the Shattering (which makes it sound like an advanced geothermal project that went wrong) seems to all point in that direction.

The only thing that makes me think otherwise is that the Stillness, although enormous, is still far smaller than a supercontinent made up of all of Earth's continents would be, but Jemisin does say later on that other continents and islands may actually still exist elsewhere in the globe, so it isn't necessarily Pangaea II.