Released back in 2016, XCOM 2 was a worthy, if flawed, sequel to the classic 2012 turn-based strategy game XCOM: Enemy Unknown (itself a remake of the 1993 game X-COM: UFO Defence) and its expansion, Enemy Within. A year later Firaxis released War of the Chosen, an interesting expansion pack to the game which, inexplicably, they decided to sell at the same price as a full-price game. I demurred on purchasing it until it came down in price. 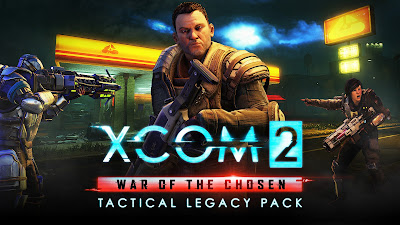 The Tactical Legacy Pack contains several key parts, including a collection of challenge maps which pits your team against a tough objective as well as new items and maps (some of them revamped versions of fan-favourite maps from the original game and its expansion). However, the meat of the pack is something new to the franchise: a narrative and story-focused single-player campaign. A standard game of XCOM consists of two parts, a strategic metagame where you recruit soldiers, research new technology and make decisions on what operations to carry out next against the aliens, and a tactical, turn-based combat mode where you deploy the troops you've chose and outfitted in battle.

The Tactical Legacy campaign throws out the strategic part of the game in favour of a series of missions. There's no research, flying around the globe with the Avenger or recruiting new soldiers (at least, not in the traditional way). Instead you go from battle to battle to battle, with objectives being laid out during the loading screens and in-mission voiceovers. It's an experimental change to the standard XCOM formula and one that is quite interesting, removing as it does the agonising decisions on what troops to bring on missions and what equipment to use, as your troops are selected and outfitted for you.

The campaign is divided into four episodes, each consisting of seven missions. That's 28 missions to get through the story, and will in total take a player between 10 and 15 hours to traverse (depending on the difficulty mode you select). Each of the four episodes has a different focus: "Blast from the Past" sees Bradford (aka "Central") escaping from the fall of XCOM HQ and teaming up with some other survivors to carry out a mission. Along the way he and his new team attract more support and they realise they could transition XCOM into a guerrilla resistance force. "It Came from the Sea" is a nod at the 1994 game X-COM: Terror from the Deep, with XCOM having to fight off an invasion of aquatic chryssalids (sadly, there aren't any actual underwater missions). "Avenger Assemble" sees Lily Shen reluctantly taking to the field as she scavenges crashed Interceptors, UFOs and Skyrangers to get the rebel carrier, the Avenger, ready for launch. "The Lazarus Project" sees both Bradford and Lily entering the field to recruit more elite soldiers for XCOM.

Completing these missions also unlocks weapons, soldier recruits, maps and some new enemy types, all of which will then appear in a subsequent War of the Chosen campaign. The Tactical Legacy Pack therefore offers both a significant amount of gameplay on its own terms as well as a lot of new bonus stuff to enhance a new playthrough of the standard XCOM 2 campaign (although only with War of the Chosen installed; this stuff won't work with vanilla XCOM 2). Also entertainingly, the expansions allows you change the game's soundtrack, between the standard XCOM 2 soundtrack, the Enemy Unknown soundtrack or, impressively, a remixed and upgraded synthwave version of the original 1993 game soundtrack, which is very well-done.

It's hard to knock this kind of material, especially as it's free. One of the criticisms levelled at the pack is that a set of linear missions isn't very XCOM-y, which I sort of agree with. All of the new generation of XCOM games have had linear story missions popping up at one point or another, but as a change of pace from the traditional gameplay type before getting back to the procedurally-generated missions. If you're a purist who hates linear missions, then yes, this might not appeal to you. More irritatingly, the only way to unlock all the stuff from the expansion in a standard game is to play through the missions.

That said, the missions are pretty good and interesting. Selecting troops, equipment and upgrades forces players out of their comfort zone and gets them acquainted with troop classes and weapons they might not normally deploy. You can also massively ramp up the difficulty on these missions to very high levels to make them even more of a challenge for hardened players.

It may be churlish to criticise this amount of free content, but there are a couple of issues that arise. One is that the new missions don't make many concessions to in-universe logic: your soldiers include Reapers and Templars (from War of the Chosen) long before you may have recruited those factions. XCOM 2's conceit is that XCOM lost the war in the original game very early on, but this game sees XCOM using advanced plasma and laser weapons in combat and also features crashed advanced Interceptors from the original game. If, like me, you've not played War of the Chosen yet and decided to join in the hype train with this expansion, there's a hell of a lot of stuff left unexplained (even moreso if you didn't play vanilla XCOM 2 either). Also, given that XCOM 2 launched two and a half years ago in a pretty iffy technical state and has been patched several times, it was somewhat dismaying to see the game still managed to crash several times during my playthrough with occasional graphics and game logic bugs taking place.

Having said that, these problems are more niggling than catastrophic. If you have that itch that only quality turn-based combat can scratch, the Tactical Legacy Pack (****) certainly delivers on that front. The expansion offers a solid gaming experience on its own merits, adds a lot of fresh content to your standard War of the Chosen playthrough, brings in a lot of new challenge maps and skirmishes, expands on the XCOM story and lore, and even brings in a whole new (and presumably expensive) soundtrack. It's a lot of stuff for exactly £0 ($0). The Tactical Legacy Pack is available now on PC and will download automatically for all War of the Chosen players next time you install the game. Firaxis have been unclear on when and if the expansion will be added to the XB1 and PS4 versions of the game.
Posted by Adam Whitehead at 21:10

Thanks for the review, I'll likely pick this up.