The feted comic book artist Carlos Ezquerra has passed away from lung cancer at the age of 70. 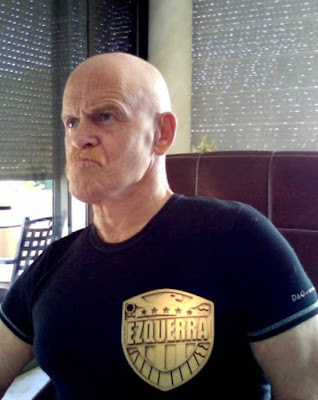 Ezquerra was born in Spain in 1947. He started his artistic career drawing for Spanish periodicals, but in 1973 moved to London to work for the British comics market, starting with The Wizard and Pocket Western Library, as well as romance strips. In 1974 he started working on Battle Picture Weekly, a war comic, and gained his first fans for his visceral action scenes and readily-identifiable characters. Ezquerra used a shorthand of basing iconic characters partly on famous actors, basing the character of Major Eazy on actor James Coburn.

In 1977 Ezquerra was asked by editor Pat Mills to help launch his new comic 2000AD. Writer John Wagner had created a new character, a tough lawman of the future, and Ezquerra created the iconic look for Judge Dredd (whose formidable chin was inspiared by actor Clint Eastwood), as well as designing the colourful, insane landscape of Mega-City One. Ezquerra was credited as Judge Dredd's co-creator, but he was unhappy when another artist, Mike McMahon, was chosen to draw the first story proper. Ezquerra

Ezquerra and Wagner reunited in 1978 to create a new character, Strontium Dog, for Starlord comic (which later folded, with its characters moving into 2000AD). Strontium Dog, which was about the adventures of a mutant bounty hunter called Johnny Alpha, proved to be a long-running success with Ezquerra illustrating every story for ten years (until an ill-advised decision to kill off the character led to Ezquerra quitting; he rejoined the strip when the character was resurrected).

Ezquerra's career was dominated by Judge Dredd and Strontium Dog, with him illustrating both characters regularly until the late 2000s. During this time he sometimes guested on other strips, such as DC's Hitman and Garth Ennis's Preacher, but his focus remained on the two characters that defined his career. His contribution to both wound down after 2010, when he had a lung removed from complications arising from a cancer diagnosis. Despite his bullish defence - "who the hell needs two [lungs] for drawing?" - his work rate declined.

Ezquerra was one of the defining creative forces in modern British comics and he will be missed.
Posted by Adam Whitehead at 19:14