Although not confirmed, there are indications that Amazon Studios have passed on Ryan Condal's proposed Conan the Barbarian TV series and the project is now out to tender for another network to pick up. 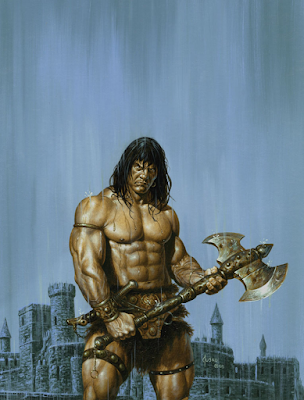 Back in March Amazon had announced that Ryan Condal (executive producer of the well-received dystopian drama Colony) had been drafted in to develop a TV version of Robert E. Howard's titular hero. Three previous movies had been made based on the Conan character, two in the 1980s starring Arnold Schwarzenegger and a more recent movie starring Jason Momoa. However, all of these films had used original scripts and been criticised for not using the original source material.

Condal got fans excited by confirming that his series would directly adapt the Robert E. Howard short stories, with the pilot being an adaptation of The Frost Giant's Daughter, the earliest-set story in the Conan mythos, about Conan as a callow teenager having only just left his homeland of Cimmeria. Writer Ashley Edward Miller (Fringe, Terminator: The Sarah Connor Chronicles, Black Sails), a noted Conan fan and expert who hosts a podcast about the the character and had read Condal's pilot script, tweeted last week that the project was now dead at Amazon and was being shopped to other networks. Condal did not confirm this, but did like the tweet and posted a somewhat cryptic reply (an image of direct John Milius holding Conan's sword on the set of the original Conan the Barbarian movie).

One interesting bit of information to emerge was that the working title for the series was actually Conan the Cimmerian, an interest title change.

Amazon haven't confirmed that the project has been dropped, so treat this as a rumour for now. With Amazon firmly committed to their massively expensive Lord of the Rings prequel TV series and apparently moving forwards with the Wheel of Time TV project (which has recently begun hiring new staff, a sure sign that it's been at least "amberlit"), it seemed a bit ambitious for them to also start developing a third fantasy show as well.

Where else the project might end up is questionable, with HBO overflowing with genre projects and Netflix developing two live-action fantasy shows (the in-production The Witcher and the just-commissioned live-action Avatar: The Last Airbender), but given the name recognition of Conan I'd be surprised if someone else didn't at least take a look at the project.

More news when it breaks.
Posted by Adam Whitehead at 23:04