In a move that redefines the word "unexpected", Netflix has greenlit a live-action TV adaptation of the classic animated fantasy series Avatar: The Last Airbender, which aired between 2005 and 2008 on Nickelodeon. Alongside the announcement, they have also released a piece of concept art depicting Avatar Aang and his flying bison, Appa. 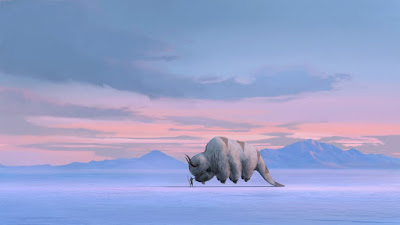 Original showrunners Michael DiMartino and Bryan Konietzko are also serving in that capacity on the live-action series, which will be a co-production between Netflix and Nickelodeon. There was a previous attempt to translate the story to live action, resulting in the movie The Last Airbender (2009) by M. Night Shyamalan. The movie was rightly reviled for its awful writing and direction and the controversial "whitewashing" of the core cast of characters (who hail from a mixture of Tibetan, Inuit and Asian analogue settings). DiMartino and Konietzko throw shade at the movie in the press release for the new show, confirming that the ethnic makeup of the original characters will be maintained.

The new Avatar: The Last Airbender will enter production in 2019, presumably for a 2020 debut on Netflix. This marks the networks's second major epic fantasy project, following on from The Witcher (which starts shooting next month for a late 2019 launch). According to Netflix and the producers, they have been planning this project for a long time.