In 2016, high school student Dylan Maxwell was expelled from his school in Oceanside, California for drawing genitalia on twenty-seven staff cars. Amateur film-makers Peter Maldonado and Sam Eckland proved his innocence through a thorough video investigation, although they unearthed a lot of secrets about their school, friends and teachers in the process. 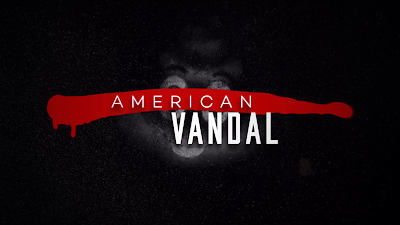 Eighteen months later, having been made famous through the Netflix series based on their exploits, Peter and Sam are back. A devastating prank known as the "Brownout" has taken place at St. Bernadine Catholic School in Bellevue, Washington. A student, Kevin McClain, has been found guilty and expelled, but his friend Chloe believes he was coerced into giving a false confession. Peter and Sam are soon on the case, and finding new secrets in a new school.

American Vandal's debut season was one of the unexpected highlights of 2017, a show with a juvenile premise (a guy spray-painting phallic imagery on cars) which quite unexpectedly turned into an insightful analysis of life in the modern American high school, with cliques, the popular kids, the ignored ones and the posers, all brought together by the power of social media.

The second season is, even more unexpectedly, better. The investigation is more serious, more epic and more involved: there are actually three crimes and the criminal remains at large, even taunting Peter and Sam through Instagram as the trail grows colder and warmer. In the first season Peter and Sam were part of the story (and, briefly, suspects), insiders who knew everyone involved. In the second season they are minor celebrities but outsiders who can come into the school with no pre-conceptions, which both helps the investigation (they can consider suspects everyone else immediately rejects) and hinders it (people are less likely to open up to them). This shift in format works quite well and leads to a more interesting investigation.

That said, it's an investigation that opens with a somewhat graphical account of what can only be described as an explosive faecal decompression on a large scale. Getting through the first episode or two may require a strong stomach (and don't repeat my mistake of watching the first episode whilst tucking into a curry) and a relatively high tolerance for toilet humour. Once this is out of the way, however, the story opens up and goes in interesting directions. The finger of guilt moves from Kevin (a great performance by Travis Tope) to basketball star DeMarcus Tillman (an outstanding turn by Melvin Gregg), allowing the show to make some interesting comments on class, race and the insidious nature of sports funding in American high schools, all with a tremendously light touch.

Like the first season, the story starts off as a comedy and moves into more serious areas as it proceeds, upending friendships and brutally exposing the insecurities and secrets of the characters. Unlike the first season, which ended on an ambiguous note with the identity of the graffiti cast only being (strongly) alluded to but not confirmed, the second season has a very definitive resolution, and the crime turns out to be far more elaborate than first though with multiple layers that expand American Vandal from being just about pranks to wider and more serious crimes. This leads the show into a thorough and effective exploration of digital relationships in the modern world. The first season touched on it a bit, but the second season eviscerates it and raises a whole load of interesting, disquieting questions.

But then it comes back to the poop, and as one of the characters says, "Poop is funny." American Vandal is a multi-layered show working on a lot of levels and exploring some serious topics, but always with a laugh a few moments away, whether it's a sharp line of dialogue or a strong visual gag or, indeed, scatological humour. I think a lot of people will pointblank refuse to watch the show because of that lowbrow premise when they would otherwise really enjoy the more serious turn the show takes in the last two episodes, and that's a shame.

For those with stronger constitutions, American Vandal's second season (****½) is an improvement over its already strong-predecessor and uses lowbrow humour as a way of exploring really relevant and interesting modern sociological phenomenons and how it impacts on young people, and in a far more entertaining, subtle and less-exploitative way than shows like 13 Reasons Why. It's a smart and intelligence show, albeit one built on gross foundations. It is available to watch now on Netflix.
Posted by Adam Whitehead at 11:29