In surprising news, Telltale Games, the studio behind the Walking Dead, Game of Thrones and Wolf Among Us adventure game series (among others), is closing for good. 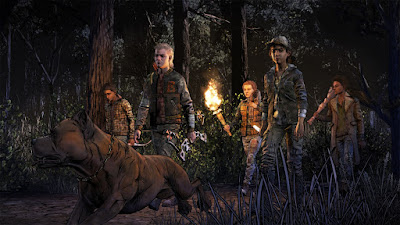 Telltale was founded in 2004 by ex-staff from LucasArts, the formidable studio that in the late 1980s and throughout the 1990s had created some of the greatest video games ever made, from Monkey Island 2 through TIE Fighter to Grim Fandango. The studio's goal was to bring back the adventure game (a narrative-focused game where puzzle-solving and conversation is key to completing the game, rather than combat and explosions) from the abyss, overcoming issues with long development times by breaking their games into episodic "seasons" with each 2-4 hour "episode" released a few weeks or a couple of months apart. Their early games were patchy, with Sam and Max Save the World (2006) and Tales of Monkey Island (2009) - both direct sequels to LucasArts games - being moderately successful but games such as Back to the Future (2010) and Jurassic Park (2011) having a much more mixed reaction.

The studio's fortunes had a massive boost with the release of the first season of The Walking Dead in 2012. A massive critical and commercial success, selling over 28 million copies of the five episodes, The Walking Dead was praised for its focus on characterisation and storytelling over violence, especially given its zombie apocalypse setting. Telltale underwent a major expansion and its next game, The Wolf Among Us, was even more critically praised, although it did not sell as well.

However, internal dissent at the studio soon saw much of the creative team behind The Walking Dead leave and set up a rival adventure game studio, Campo Santo. Their debut game, Firewatch (2016), was an even bigger critical success than The Walking Dead and their sales were extremely strong.

Telltale released what can only be called a glut of games over the next few years: The Walking Dead - Season 2 (2013), Tales from the Borderlands (2014), Game of Thrones: The Adventure Game (2014), two seasons of Minecraft: Story Mode (2015), two seasons of Batman (2016) and Guardians of the Galaxy (2017). Although some of these had a strong critical reception, sales were somewhat disappointing for all of these games bar the Minecraft adventure titles. In early 2017 four of the studio's design leads quit simultaneously, creating a leadership vacuum that was never filled.

The studio's commitment to releasing a lot of product also alienated gamers. First, the sheer quantity of material released saw many gamers giving up trying to follow it all. In addition, the studio insisted on using the same, increasingly decrepit game engine for all of their titles. The engine was looking a bit creaky already when The Walking Dead was released, but the strong writing and voice acting overcame the problem. However, with the transition to the X-Box One/PlayStation 4 generation, the fact that the games weren't looking any better than on the X-Box 360 or PlayStation 3 irritated a lot of fans.

The release schedule also caused enormous problems in the studio. Most video game studios develop games over a period of 2-4 years, entering a period known as "crunch" in the final 3-6 months leading up to release where a lot of overtime is necessary to get the game out of the door. With most studios, the release of the game allows for a rest-and-regrouping period of at least a few weeks before work has to begin on the next title in earnest. Telltale's release schedule meant this was not possible and the studio existed in a state of "permanent crunch", with no downtime for developers to regroup before making the next game, leading to a spate of departures.

Telltale's closure means that several announced titles have been cancelled. These include second seasons of The Wolf Among Us and Game of Thrones and an ambitious Stranger Things tie-in and co-production with Netflix. What is unclear is the status of The Walking Dead: The Final Season. The first episode was released a few weeks ago, a second episode is due next week and several more beyond that. A wrapping-up crew are still working at Telltale for the next couple of months, but it is unclear if they plan to finish the season or not.

The closure of a video game studio with the resulting hundreds of job losses is always sad news, especially one that had done much to resurrect a beloved, half-vanished genre. However, the company's toxic work environment and the pressure to keep delivering quantity of content over quality appears to have helped run it into the ground. The good news is that many other companies are already snapping up Telltale developers via a Twitter campaign, and with Valve (and their formidable financial resources) recently buying Campo Santo, one wonders if they could have plans for expansion there.
Posted by Adam Whitehead at 22:55

Campo Santo was purchased by Valve, not Microsoft. Both in Washington state though.