The world is falling into chaos. A wall of darkness advances southwards, destroying or twisting all in its path. The surviving varl, humans and horseborn have fallen back on the human capital, Arberrang, to make their stand, pursued by their former enemies, the dredge (who in turn are fleeing the darkness). But even there they find the pressing need for unity to survive undermined by infighting and betrayal. Far to the north, the band of mercenaries known as the Ravens have passed into the darkness, protected by the menders Juno and Eyvind. Their mission is to find the source of the darkness and destroy it forever...but in the process they must expose their own culpability in all that has transpired. 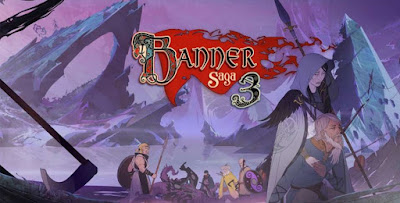 The Banner Saga is a trilogy of video games inspired by the artwork of Don Bluth, Norse mythology (but not quite like you know it) and epic fantasy. The games blend a decision-making system, where you have to make decisions on who lives and who dies as you guide your caravan of forlorn heroes across hundreds of miles, with an XCOM-esque turn-based battle system, all against a truly epic backdrop. Funded on Kickstarter, the original Banner Saga was released in 2014 to critical acclaim. The Banner Saga 2 followed to even more acclaim in 2016 and now the third and concluding game in the trilogy has been released.

Finishing off a video game trilogy can be a difficult thing to do, satisfying narrative threads built up over many hours of gameplay. Some recent series-closing instalments have been bitterly disappointing, others extremely well-received. Fortunately, The Banner Saga 3 falls into the latter category.

The game is a little different to its forebears though. The previous two games focused on multiple caravans making their way across a war-torn but recognisable landscape. The third one splits its narrative more definitively in two. In one, you have to command the defence of Arberrang, first against the attacking dredge and then against the twisted creatures produced by the darkness as it advances relentlessly. This sequence sees you having to make hard decisions on who lives and who dies, how to handle both tactical issues and political intrigue. It's a delicate juggling act, where the wrong decision can leave major characters who've grown, evolved and levelled up over three games dead. The goal of this sequence is buying time for the Ravens to do their job. 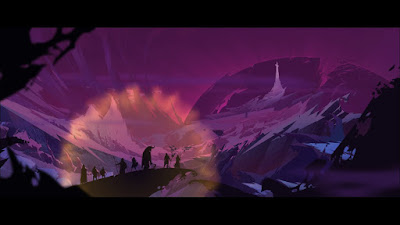 In the second part of the story, the Ravens have to travel through a landscape completely rearranged from reality, a descent into a Hieronymus Bosch painting populated by twisted monsters. This part of the game is inventive and surprising, with major backstory revelations making clear what was a bit opaque in the previous two games and new enemies appearing to be fought and destroyed.

The gameplay systems are much as before. The impending finality of the game means it can be darker and more ruthless than the first two games, with more of a chance of a major character dying for good as a result of your decisions. But the game rarely feels unfair, and if things go really badly wrong there's usually a window to reload your last save if you really don't want to ironman your way through events.

Combat remains as enjoyable as ever, although by this point your characters are at such a high level and Renown (the game's equivalent of EXP, which slightly confusingly does triple-duty as currency and reputation) is so plentiful that they're in danger of being overlevelled. Even the hardiest enemies are now a manageable threat and most battles in the game are now a cakewalk, even at the hardest difficulty levels. This is a far cry from the first game in the series where each battle was a fiendish tactical challenge. There are a couple of difficulty spikes in the battles (particularly in the final engagement), but nothing too objectionable.

At the core of The Banner Saga, though, is its story and its characters. This story has taken our heroes and anti-heroes from bucolic villages through enchanted woods to windswept prairie and into the very heart of darkness. Through it all, the characters have evolved and changed in ways that couldn't be expected. Some people have disparagingly called The Banner Saga a visual novel, and while that's really not true (between your decisions on what happens to the caravan next and the satisfying battle system, there's plenty of choices to be made), it is certainly true that The Banner Saga trilogy is the most imaginative, impressive and compelling fantasy story to appear in any medium of the last several years. It's a great story and Stoic nail the ending, treading just the right path between realistic grimness and outright nihilism, with hope, optimism and humour allowed to shine through.

The Banner Saga 3 (****½) is a triumphant conclusion to an excellent series. It's well-written, excellently-characterised and makes the player feel a real part of the life-and-death decisions made at the end of the story. It is perhaps a little too easy (although the ticking clock mechanic in the second half of the game does restore some urgency to things) and at 8 hours the game certainly isn't the longest, but overall this is a spectacularly successful ending to an excellent series. It is available via Steam for PC now. It is also available as a digital download for X-Box One, Playstation 4 and Nintendo Switch.
Posted by Adam Whitehead at 22:56

Email ThisBlogThis!Share to TwitterShare to FacebookShare to Pinterest
Labels: stoic, the banner saga 3