Netflix have moved forwards the production timeline of The Witcher. Originally the show was going to debut in 2020, but it should now premiere in late 2019 instead. 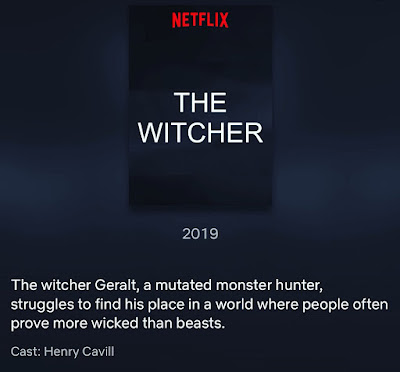 We also know now that production is slated to start on 18 October 2018 and will conclude by 31 March 2019. The production will be based in Budapest, Hungary, with additional filming in Poland. That suggests that Netflix could get the show on air by around November, depending on post-production requirements.

Casting details for the character of Ciri have also leaked from the British casting company involved: 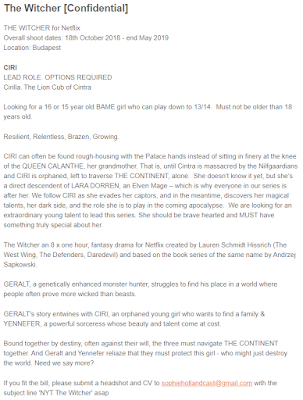 The requirement for an actress to be "BAME" (Black, Asian or Minority Ethnic) has excited some comment in quarters of the Internet, who have pointed out that in both the books and video games, Ciri is definitely a white character. However, "BAME" is also used in a British context to refer to white, non-British people (particularly those of Slavic descent, so a Polish actress would be considered "BAME"). There have been calls for a Polish actress to play Ciri, given that a British actor (Henry Cavill) is playing Geralt and the most popular actress choices for Yennefer are French (Eva Green) and Irish (Katie McGrath). Whether that is what this is referring to is unclear.

A major issue with casting a non-white actress for Ciri is that this would also require her father and father's people to be non-white, and given that they have a hostile, aggressive and antagonist role in the story, this may have problematic connotations.

More news as it comes in.
Posted by Adam Whitehead at 11:42

Email ThisBlogThis!Share to TwitterShare to FacebookShare to Pinterest
Labels: netflix, news, the witcher