Jessica Jones has defeated her nemesis, Kilgrave, but the victory brings her little joy. She continues to survive from day to day, exposing adulterers to make ends meet and relying on the bottle to get through the tough days (which are most days). But a new case heralds a painful moment of personal revelation, one which will have dire ramifications for Jessica and her friends.

The first season of Jessica Jones jostles with that of Daredevil at the apex of the Netflix subset of the Marvel Cinematic Universe. Netflix's Marvel shows are grounded, smart and beautifully-shot, although in terms of story and character they tend to be all over the place; Jones and Daredevil were great, Luke Cage and Iron Fist rather more variable and the team-up show The Defenders only okay.

Fortunately, the second season of Jessica Jones is rather more than okay. It's never in danger of replicating the emotionally raw, intense storyline of the first season which pitted Jones against the mind-controlling Kilgrave (played with powerful, dark charisma by David Tennant), but this is mainly because it's too smart to try. Instead, the second season opens with setting Jones new challenges in the form of her friend Trish Walker (Rachael Taylor) going through a difficult patch, a new landlord arriving who quickly develops problems with Jessica and a new case arriving which seems ridiculous but rapidly becomes deadly.

Season 2 of Jessica Jones opens quietly, with a number of slow-burning episodes dedicated to building and exploring character. The character who benefits the most from this is Jeri Hogarth (a never-better Carrie-Ann Moss), Jessica's lawyer-turned-sometimes-client who is faced with both personal and professional difficulties and deals with them in her own, increasingly ruthless way. Carrie-Ann Moss kicks more backside in this season than she has in anything since The Matrix and the show makes full use of her formidable screen presence, making up for her being slightly under-utilised in the previous Marvel Netflix shows. 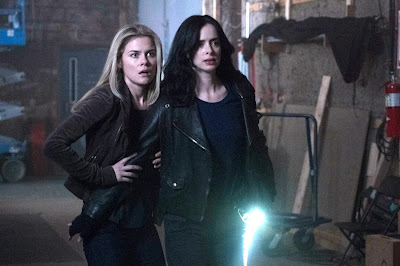 This slow-burn approach gradually gives way to more impressive episodes full of plot development and character twists, giving the season a feeling of escalating action culminating in a surprisingly sombre, intimate finale (with less of the flashy, cliched "final battle" feel to it as in some of the other Netflix Marvel shows). This structure works really well, although it's not without the risk of people dropping out of the show long before things start picking up. Still, whilst Netflix insists on these shows having 13 episodes rather than the 8 or 9 most of them feel like they deserve at best, the creators have to come up with better ways of filling those hours (Iron Fist's second season in fact has a count of only 10 episodes, which shows Netflix may be listening to this complaint).

Thematically, Season 2 of Jessica Jones is about family and what happens when your family is not torn apart by outside forces (like Kilgrave last time out) but from within, by secrets and hidden vices and lies. The characters are put through the emotional wringer several times over and unexpected, shocking events mean that the status quo is not going to be put back together again. Yet the second season impressively ends on a note of hope and optimism for Jessica, having just taken her to her darkest moment, perhaps a nod to the fact that this character deserves more than to just have bad things happen to her again and again.

It's not a perfect season. Trish's story starts off well but then goes off the rails later on, with Taylor clearly at a loss on how to portray her character's bizarre addiction storyline, and a couple of storylines feel like wheel-spinning for the sake of it, but these issues are pretty minor compared to the ones that have blighted some of its sister-shows.

Easily the best season of a Marvel Netflix show since the original Jessica Jones almost three year ago, Season 2 is well-written, fantastically-characterised season of television which takes bold risks (like the near-absence of an over-arcing villain) and comes up with new ideas to refresh the increasingly stale slate of shows in this universe. Fresh and compelling, Season 2 of Jessica Jones (****½) is well worth watching. It's available on Netflix worldwide now.
Posted by Adam Whitehead at 19:30