Revenge of the Fans is reporting that Netflix are developing an animated TV series based on the Diablo trilogy of video games from Blizzard Entertainment. 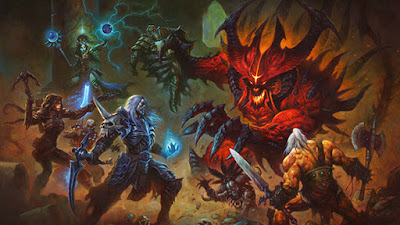 The original Diablo was released in 1996 and has been followed by expansions and sequels: Diablo: Hellfire (1997), Diablo II (2000), Diablo II: Lords of Destruction (2001), Diablo III (2012), Diablo III: Reaper of Souls (2014) and Diablo III: Rise of the Necromancer (2017). The games are set on the world of Sanctuary, where the native humans are engaged in a battle with the Prime Evils, a loose alliance of demons led by the fiendish Diablo, the primary antagonist of the series. The worldbuilding and lore is notable for being far less intricate and complex than that of Blizzard's other two big properties, WarCraft and StarCraft.

The Diablo franchise is also notable for its focus on action, battles and combat over a dense narrative. Although this looseness makes adapting the Diablo series more attractive than tackling the complex, much-retconned StarCraft universe (WarCraft is likely to rest a while after the 2016 movie, which only just broke even), it also means there isn't as much information to draw upon. A bigger draw might be that Diablo III and its expansions have sold over 30 million copies to date, roughly twice the sales of StarCraft II and its expansions.

According to RotF, Netflix are tapping Andrew Cosby (Eureka, the new Hellboy movie) to write the series. It would be Netflix's second animated series based on a video game, after Castlevania (which returns for a second season later this year).
Posted by Adam Whitehead at 17:09

I would LOVE a Warcraft animated show or film(s) done the same way the cinematics have been from Warcraft 3, right through World of Warcraft.

Is that too much to ask?