Bradbury City, Mars. Hak Veil used to pilot ships through the blackness between worlds, acting as a highly-trained combat operative. After a few things went wrong, he's wound up abandoned on the Red Planet, trying to find a way of getting back to Earth. His unique abilities allow him to find work in the most unlikely of places and his new job is a doozy: playing bodyguard to a pen-pusher, one of a team sent to audit the colony's finances on behalf of the colonial authorities. But things soon start going south and Veil finds himself on the line, with the promise of a ticket home being the only thing keeping him going... 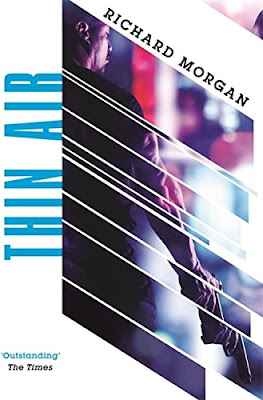 Rewind a decade or so and Richard Morgan was one of the hottest new voices in science fiction. His Takeshi Kovacs trilogy (now a Netflix TV show under the title Altered Carbon) was a vital, angry work of cyberpunk meshed with hard-edged, military SF. Market Forces was a corporate thriller with an SF angle and the even angrier, dirtier Black Man (Thirteen in the US) was a gripping and increasingly prescient story of nations collapsing amidst a tidal wave of rising social discontent.

Morgan then took a hard-right turn into the grimmest end of the fantasy genre (albeit SF-tinged) with his Land Fit For Heroes trilogy (The Steel Remains, The Cold Commands, The Dark Defiles), an accomplished work but one where, it turns out, his sensibility was perhaps a little too familiar, with writers like Joe Abercrombie and Mark Lawrence achieving greater success in that end of the market. Morgan's voice and sensibility felt a little redundant in that field at that time, despite his obvious writing chops.

Morgan is now back in the field of science fiction and it feels like the return of one of SF's prodigal sons. SF is ready for a new, scintillating book that tears the genre a new one and does fresh, exciting things.

Thin Air is not that book. That is not to say that Thin Air is a bad novel, as Morgan's skill with prose, with ideas and with violent action remain undimmed. It is, however, a novel that is not so much in his comfort zone as it is one clad in a Richard Morgan dressing gown and slippers. We once again have an ultra-competent, alpha-male protagonist with near-superhuman technological abilities whom everyone underestimates repeatedly, whom women want to have sex with and men want to have a beer with, who is constantly living on the edge of either death or bankruptcy (despite his clear and unique skillset), who gets in over his head but comes out on top through his superior skills and intelligence and ability to murder literally everyone in a room in seconds. When Morgan did that with Takeshi Kovacs, it was fresh and exciting. When he did that with Carl Marsalis, the racial angle added something fascinating to the mix. When he did that with Ringil, the fact he was an angry and unapologetically gay man made that work. With Hak Veil, it's starting to feel a bit less fresh and a bit more like a retread.

It doesn't help that there isn't really a great hook in the story. Mars is being audited and some people are unhappy with that and that's really kind of it. The Martian angle is also not tremendously distinctive either, the odd mention of the weaker gravity and the tall walls of Mariner Valley aside, the book could be taking place in pretty much any SF metropolis on or off Earth. Kim Stanley Robinson's position as the author who has brought Mars vividly to life as its own place better than any other remains unchallenged. Also, most of the characters are distinctly unlikable and the plot makes frequent pit stops for increasingly non-sequitur random sex scenes (rather more than in most of Morgan's prior novels, in fact, including the distinctly late-Heinleinian use of the phrase "pneumatic breasts").

On the plus side, Morgan's writing crackles with kinetic energy and no-one does a brutal turn of phrase better than him. If this novel is Morgan-by-the-numbers, it at least brings the author's talents as well as his weaknesses. There's some pretty good action set pieces, Veil putting together the clues to the mystery is fun (even if, as with his previous novels, there's zero chance of the reader solving the mystery themselves) and there's a wry sense of humour that occasionally surfaces. Whilst virtually all of the characters are unlikable, they're also mostly at least interesting and well-drawn (the major exception being Veil's stripper neighbour whom he also has a no-strings relationship with) and the novel's finale features an appropriate amount of clever plotting and visceral carnage that makes for an explosive ending to the story, even if the stakes never feel hugely engaging prior to that.

Thin Air (***) is a fairly solid Richard Morgan novel. It's far from his best, but certainly readable and it's nice to see him back in the science fiction thriller genre. But it feels like he's capable of far more. Readable, engaging but ultimately perhaps a little too ordinary a novel for an author who should never be ordinary. The book will be published on 25 October 2018 in the UK and USA.
Posted by Adam Whitehead at 19:39

I loved it. I'd never read a Richard Morgan book, although I loved Altered Carbon on Netflix, but didn't know who wrote it.

Its been a while since I found a book that I struggled to put down. Listening to it on Audible cost me a couple of nights sleep. Give me more!

Bolly, read the other books by him, they're better but I liked this book much more than the reviewer did. I missed my Richard K. Morgan jones and this helped, if only for a little bit.

I thought the book was great. I really enjoyed it.