The British actress and female SF icon Jacqueline Pearce has passed away at the age of 74. She will be best-remembered for her role as the villainous Servalan in cult BBC space opera Blake's 7. 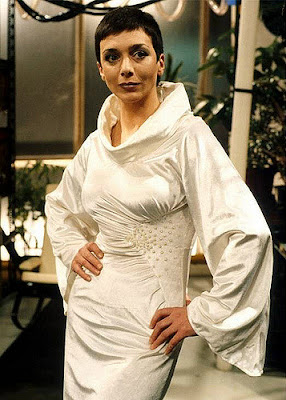 Born in Woking in 1943, Pearce attended a convent school. When she voiced her ambition to become an actress, the nuns apparently rushed off and said a mass for her soul immediately. Pearce then made her screen debut in an episode of Danger Man in 1964. She appeared frequently on television and in film through the 1960s and 1970s, including in Hammer Horror films. She gained greater fame as a regular on David Copperfield (1973-74) and Couples (1975-76) before being cast in the role of Supreme Commander Servalan, commander of the Terran Federation's military forces, on Blake's 7 in 1978, debuting in the sixth episode of the series, Seek-Locate-Destroy.

Terry Nation originally created the role of Servalan to be a single functionary in the Terran Federation who would dispatch Travis (Stephen Grief) on his mission to kill Blake, with the intention that Travis would be the primary recurring villain of the series. However, Nation was intrigued by the idea of a female antagonist, especially one who used charm, diplomacy and wits as opposed to Travis' brute force approach, and made her a recurring character. The show's costume designer appreciated the chance to design exotic and elegant clothes for Servalan and soon her exotic wardrobe choices became as much a debated part of the show as the starships and thematic exploration of the grey area between freedom fighters and terrorists.

Pearce played the role in 29 episodes across all four seasons, more than half the episodes of the series and actually one more episode than the titular Blake (Gareth Thomas), and outlived Travis (who was killed off in the Season 2 finale). Her character of Servalan was praised for being well-developed with credible motivations and character depth, as well as her chemistry with erstwhile protagonist Avon (Paul Darrow), which could spin on a dime from mutual loathing to extreme sexual tension.

Pearce also enjoyed a lengthy association with Doctor Who. She was cast as the vicious Chessene in the 1985 serial The Two Doctors, where she did battle with both Colin Baker as the Sixth Doctor and Patrick Troughton as the Second. She then starred in the audio dramas The Fearmonger (2000) and Death Comes to Time (2001) before becoming a recurring voice actor for the Big Finish audio range, most notably in the series of stories starring John Hurt as the War Doctor in 2015-17. Her last on-screen role was in an episode of Casualty in 2006.

Pearce brought erudition, wit, intelligence, charm and presence to the role of Servalan, creating one of the most iconic villains in the history of science fiction in the process. She will be missed.
Posted by Adam Whitehead at 18:32

A great actress in a great character. A very sad day.

RIP, she was one of the best onscreen "baddies" of them all, charming, sexy and devious. Going by the evidence of her interviews regarding Blakes 7 she had a whale of a time doing the show and seemed like a tremendously fun person.