Raymond E. Feist's Riftwar Cycle has been optioned for television by production company BCDF Pictures. Kurt Johnstad (300, Atomic Blonde) is writing a script based on the first novel in the series, Magician, which would presumably serve as the first season of the series. 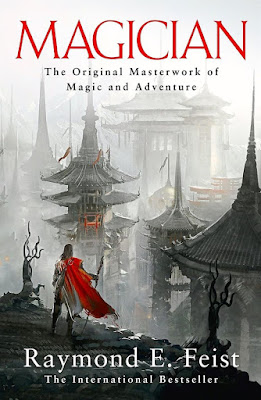 It should be noted that there is no director attached and no studio has picked up the project yet. BCDF Pictures has mostly succeeded in getting low-key, low-budget movies made like Liberal Arts and Higher Ground, so this would be quite a departure for them.

The Riftwar Cycle spans 29 novels (divided into ten smaller series), 3 short stories, a novella, a companion book and two video games, all published between 1982 and 2013. The series was based on an earlier series of roleplaying game products from Midkemia Press, released in the late 1970s. The series has sold more than 25 million copies to date, although the first novel, Magician, is by far the biggest-selling and most popular individual book in the series. Raymond E. Feist wrote 23 of the novels by himself, co-wrote 3 novels with Janny Wurts and 3 more books were written by other authors based on Feist's ideas. There have apparently been multiple attempts to option Magician over the decades, but Feist has rejected them because he found them not to be faithful enough to the series.

Magician tells the story of the Kingdom of the Isles, a nation on the world of Midkemia, which is invaded via dimensional portals by forces from the Tsurani Empire, located on another world. Later books in the series expand the setting to bring in demons, dark gods, chaos magic and other elements. Presumably no TV series would try to adapt all 29 books (especially since the latter half of the series was pretty much phoned in compared to the first), so it'll be interesting to see what the masterplan is for the project.

More news if it develops.
Posted by Adam Whitehead at 13:15

The first book is amazing, this could be really great,

This is getting optioned but not Matt Stover's Heroes Die? There is no justice in the universe.

I would prefer Malazan to be optioned but it's a pipedream

I would be far more interested in the Daughter of the Empire trilogy - a fantasy epic with a strong female lead. Perfect in the post GOT tv era

This is only a small production company which has optioned the rights. They need a big service like Amazon or Netflix to pick it up, and they're both jammed full of fantasy projects right now.

I don't consider it likely this will be made in the near future.

I really hope this gets done...hope they include a good director and cast to really bring this amazing triliogy to life