Some of the concept artists from HBO's Game of Thrones have put together a new exhibition showcasing 50 locations from the wider world of Westeros and Essos that haven't appeared in the TV show (and, in some cases, the books).


The exhibition runs from 23-27 January 2019 at the Umspannwerk Reinickendorf in Berlin. The exhibition is free, but the organisers are running a Kickstarter to assist with covering costs.

The images used in the exhibition are striking, including images of Volantis, Braavos and a version of Harrenhal that's somewhat more epic than what we got on TV. There's also this cool map: 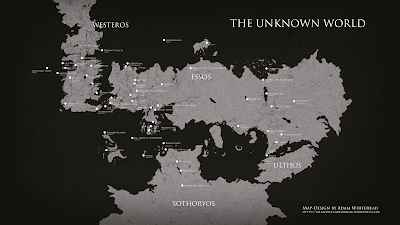 If this maps looks familiar, it's because it's based on the (definitely non-canon) world map I created for my Atlas of Ice and Fire blog a few years back. Although the map should not be taken as definitive, it is cool to see it redrawn by professionals like this.

The exhibition looks really interesting. Hopefully we'll see the artwork in another venue for a wider audience (a book featuring the artwork is part of the Kickstarter, hopefully that will get a wider release later on).
Posted by Adam Whitehead at 14:49