As previously revealed, Marvel and Disney are already developing two limited mini-series to help launch Disney's new streaming service in late 2019, with Tom Hiddleston and Elizabeth Olsen set to reprise their film roles as Loki and Scarlet Witch respectively. However, it sounds like they may be beaten to the screen by a new project which teams up Sam Wilson and Bucky Barnes. 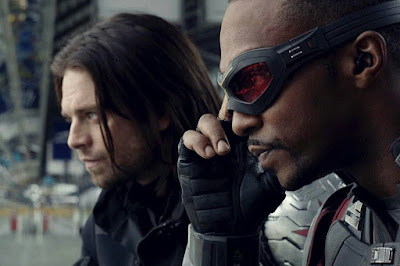 The new mini-series already has a writer on board, with Malcolm Spellman (Empire) tapped to write the scripts for the series. Anthony Mackie and Sebastian Stan are expected to reprise their film roles as Sam Wilson/Falcon and Bucky Barnes/Winter Soldier respectively.

Both actors are expected to be seen again in the still-untitled fourth Avengers movie (due out in May 2019). Mackie also recently committed to starring in the second season of Altered Carbon for Netflix, as the latest "sleeve" for main character Takeshi Kovacs.
Posted by Adam Whitehead at 20:53