Another new Paul Kearney novel for 2019: THE WINDSCALE INCIDENT

Having previously confirmed that Paul Kearney would be releasing The Burning Horse, a sequel to The Wolf in the Attic, in late 2019, it now appears we'll be getting a double helping of his work next year. Another novel, The Windscale Incident, will be published in May 2019 from Simon & Schuster. 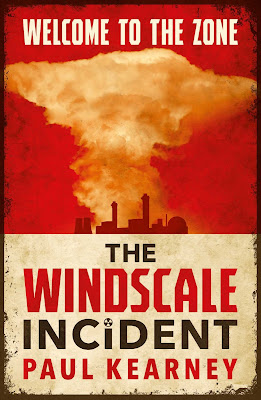 The Windscale Incident is set in 1950s Britain, in an alternate timeline resulting from the Windscale Incident, a real event which took place on 10 October 1957. The UK's worst nuclear accident, the incident involved a fire breaking out at the Windscale nuclear facility and spreading nuclear radiation over the vicinity, resulting in an estimate 250+ cases of cancer. The UK's nuclear decommissioning plant Sellafield was later built on the same site.

Kearney's novel sounds like it will be using the incident as a divergence point for a new timeline. The blurb is as follows:

A blistering 1950’s Alternate-History Apocalypse that marks the beginning of a major new trans-media franchise.

Everyone remembers where they were when they heard the news. The simultaneous meltdown at the Windscale Nuclear Reactor and the Calder Hall site in the North of England killed thousands, but what came next was worst. The radioactive cloud, dispersed by heavy winds, effectively cut Great Britain in half and created the Exclusion Zone.

Hysterical accounts of strange creatures, wolf-like packs and bands of human survivors abound, but no really knows since the last expedition was lost fifteen months ago.
But there are mysteries that must be illuminated, and for Doctors Brian Mortlake and Constance Garraway, aided by a crack team of British soldiers, it’s time to enter the Zone.


More news on the book and the "trans-media franchise" as we get it.
Posted by Adam Whitehead at 22:19

Thanks for the update. Any news on whether the final book in the Sea Beggars series will be published? It's been tooooooo long...

The rights are still held by the US publishers, Bantam Del Rey, who are refusing to either give them up to another publisher or publish the third book themselves. Until that situation is resolved, the book can't come out.

It's great to see that Kearney's getting luckier again with his publishing.
The Sea Beggars situation is the most ridiculous thing. Do you think it will help at all if one writes an emmail to Bantam Del Rey to ask them to stop this dick move? (In more refined language, of course?)

This was scheduled to come out in May 2020, but all the listings seem to have been blanked out - Amazon, BD, all say it isn't available.

Looking forward to it very much - an unjustly ignored writer for most of his career.

Also, stuck a reference myself into my new novel about Windscale and keen to see how Kearney treats it.

There was a major behind-the-scenes screw-up with the contract situation for this book, apparently, and for various reasons it is now less likely to appear in this form. Obviously if the situation changes, I will post a new article.

Can Kearney ever catch a break? Jeez. Poor bloke should be up there with Abercrombie as one of the best UK writers. Damn.