The celebrated Chinese novelist Jin Yong has passed away at the age of 94. 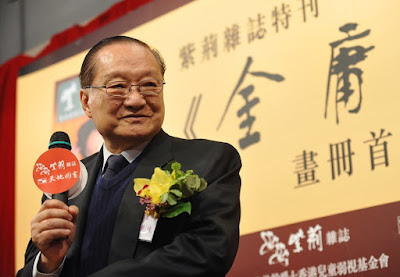 Louis Cha Jin-Yong was born in Hainan, China in 1924. In the late 1940s he pursued a career in the foreign service and moved to Hong Kong, then under British rule. A fan of literature and the classic wuxia form (which features heroic and chivalrous characters overcoming advertsity through a personal code of honour and prowess in martial arts, with elements of fantasy included), he began writing his own first novel in that mode in 1954. In 1959 he founded the Hong Kong newspaper Ming Pao, which remains active today, and which serialised many of his books before they appeared in novel form.

Jin Yong produced fifteen novels in the wuxia genre between 1955 and 1975. His best-known work is the Condor Heroes trilogy, consisting of The Legend of the Condor Heroes (1957-59), The Return of the Condor Heroes (1959-61) and The Heavenly Sword and Dragon Saber (1961-63). In his lifetime his books have sold over 100 million copies, been translated into numerous foreign languages and spawned scores of video game, film and TV adaptations. His influence in Chinese popular literature has been compared to that of J.R.R. Tolkien in the west, and he has been occasionally dubbed "the Chinese Tolkien."

Jin Yong's work also helped further popularise the wuxia genre to wider audiences, especially given the literary praise heaped on his work. By setting his work in the past and using the form to explore universal themes of honour, redemption, love and chivalry, Jin Yong achieved a wide appeal and fame outside of China as well: he also achieved a high degree of fame in Vietnam, South Korea and Japan. For political reasons his work was banned for many years in Taiwan, but this ban was lifted in 1979 and his works became subsequently well-known there.

Jin Yong's fiction is less well-known in English, as only a few books were translated in his lifetime (the Condor Heroes trilogy, for example, only started appearing in English this year). In Hong Kong he was respected more for his journalism and his non-fiction on Chinese history. In 1981 he was awarded the Order of the British Empire (OBE) for his achievements in these fields. He was also awarded the French Chevalier de la Legion d'Honneur in 1994 and the Commandeur de l'Ordre des Arts et des Lettres in 2004. The same year he received an honorary doctorate from Cambridge University in 2004. Surprisingly, he decided to attend Cambridge University at the age of 80 to study Chinese history, citing the importance of continuing to learn and grow at all ages. He achieved a PhD in Chinese History in 2010.

Jin Yong passed away yesterday after a long illness.
Posted by Adam Whitehead at 20:32