VIKINGS to get sequel spin-off series on Netflix

The History Channel's first drama production, Vikings, is wrapping up in 2020 with its sixth and final season. However, creator Michael Hirst has already lined up a sequel series, Valhalla, which will air on Netflix. 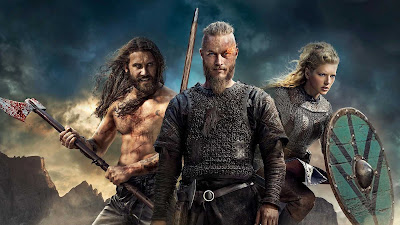 Valhalla will pick up the action some 100 years after the original series ends and will introduce a new generation of characters. It sounds like there will be a particular focus on Leif Erikson, the great explorer who sailed to Iceland and Greenland before discovering North America and establishing a settlement in Newfoundland, some four centuries before Columbus discovered the New World.

The new series will also incorporate William the Conqueror and his invasion of Britain. With Erikson's voyages and the Norman Conquest separated by the better part of a century, it sounds like the sequel series will continue the fine tradition of Vikings about mixing up dates in rather creative ways (the original series spans well over 150 years of historical events, but has some characters living through all of them).

Valhalla will be shot in the Republic of Ireland, like Vikings, and work on the series will begin in 2020.
Posted by Adam Whitehead at 20:45

I'm excited on paper, but I'm still cautious until there's a trailer.