A Brightness Long Ago by Guy Gavriel Kay

Danio Cerra is the son of a tailor who, through luck and connections, finds himself working in the household of the Duke of Mylasia, known throughout the city-stats of Batiara as "The Beast." Adria Ripoli is the daughter of a wealthy family who is predisposed to action and danger. Folco d'Acorsi and Teobaldo Monticola are rival mercenary commanders, the greatest generals of their day, whose fame and expertise are desired throughout the world, and who share a hatred and rivalry that will shape all that is to come. 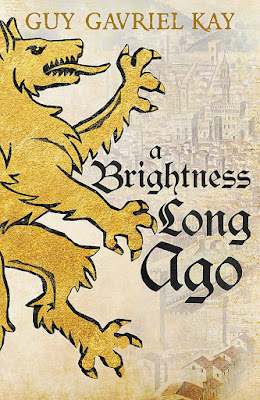 A Brightness Long Ago is the fourteenth novel by Guy Gavriel Kay, the Canadian author who (since the sorrowful departure of Gene Wolfe) may now hold the best claim to being the greatest living writer of fantasy fiction, a claim backed by the likes of both Tor.com and Brandon Sanderson. Kay's novels take real historical events and then weave a fantastical new shape out of them, creating a rich tapestry of characters, events and emotions that is never less than affecting, and, at his best, can be deeply moving.

Kay's finest novels, arguably, are Tigana, The Lions of Al-Rassan and Under Heaven, in each of which epic events are set in motion but relayed through the eyes of a small number of fantastically-drawn characters. A Brightness Long Ago comfortably joins their ranks, telling a somewhat larger, more epic story than his previous novel, Children of Earth and Sky (to which A Brightness Long Ago can be read as a prequel, although both novels stand alone). Kay's Batiara - his take on Renaissance Italy - is a land of beautiful cities and gifted artists, writers and philosophers, but it's also a land of feuding politicians and frequent warfare, which the High Patriarch in Rhodias (the Pope, effectively) is unable to overcome. With the Asharite armies threatening to breach the walls of Sarantium to the east, the cities of Batiara and the other Jaddite kingdoms are unable to join forces to save the City of Cities from its fate, which looms large in the background of the novel.

The main focus is on the cast of characters, with Danio as our first-person narrator but the action frequently cutting away to Adria, Folco, Teobaldo and several other prominent characters. As is usual with Kay, these characters are vividly well-drawn, with their hopes, desires and pasts driving their motivations. Kay's gifts lie also in atmosphere, and also in his lack of bloodlust. Too many epic fantasy authors seem to thrive on massive battles with bodies piled up like cordwood afterwards, but Kay has always been a more humane author, not to mention a more historically-minded one; bloodbath battles where tens of thousands are killed are relatively rare in real medieval and Renaissance history, with the most successful generals being those who used military force and sometimes just the threat of military force to achieve clear-cut objectives with the minimum of losses (and thus expense). As a result, the military rivalry between Folco and Teobaldo (loosely inspired by the rivalry between the real Frederico Montefeltro and Sigismondo Malatesta) is more of a fascinating game of chess, with both men seeking to out-manoeuvre the other on the battlefield, not slaughtering one another's men en masse.

Like most of Kay's novels, the book also references artists and creatives, with Danio's ambition to be a bookbinder and seller constantly thwarted by being drawn into the affairs of the mighty, and a minor subplot focusing on an artist who is constantly wandering from city to city, being paid vast sums for work that is generally never completed, because the lord in question dies or their city is taken by someone else. As with most Kay books there are also moments of real warmth, friendship and fellowship. Kay is not afraid to the show the uglier, messier side of life, death and war, but he also embraces the good things about life, and shows that it is worth fighting for.

A Brightness Long Ago (*****) is another superb novel from an author who may be fantasy's most reliably excellent, thoughtful, atmospheric and humane writer, and one whose powers remain notably undimmed. It's a book about lives, how people live them and the events that shape them, and how everything is connected. The novel will be published on 14 May in the UK and USA.
Posted by Adam Whitehead at 14:18

Email ThisBlogThis!Share to TwitterShare to FacebookShare to Pinterest
Labels: a brightness long ago, guy gavriel kay

Can anyone please tell me why UK novel covers are so much better than their USA counterparts?