Nadia Vulvokov is celebrating her 36th birthday - the same age at which her mother passed away - at a party thrown by her friends in New York. Tragically, she is run over by a yellow cab shortly afterwards. But then she wakes up back at her party again, with the exact same sequence of events playing out (unless she changes them). She makes it to the next day, only to die in another freak accident and wake up back at her party. Nadia realises that time and fate are playing a strange game with her, and she rushes to try to find an answer to the mystery of why her life is now going in circles. 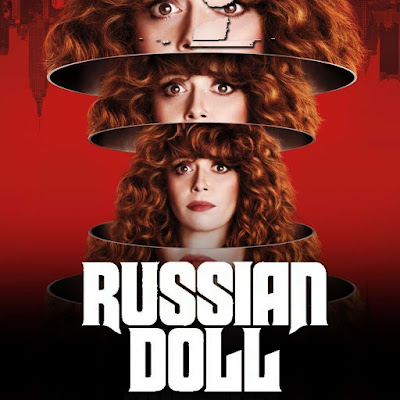 Many are the TV show and movie which have "done a Groundhog Day", trapping a lead character in a time loop and seeing how they escape from it. It's a concept rooted in science fiction but played out for both humour - as the character can do what they want without consequence, as the timeline will just reset again - and tragedy. Many of these takes on the same concept are worthy (most recently, the surprisingly solid SF film Edge of Tomorrow) but few of them explore it to the depth of Russian Doll.

Russian Doll is a Netflix series co-created by Natasha Lyonne (who also stars as Nadia). At first it appears to be a comedy, with Nadia's time loop played for laughs. Very quickly it expands beyond that to incorporate elements of family drama, romance and tragedy. The show handles the tonal variation with skill, propelled by Lyonne portraying Nadia as an unflappable, hard-bitten New Yorker who's seen it all but has deep-seated insecurities and vices. In its second half, the show expands to become more of an existential exploration of depression and addiction, and certainly becomes a lot heavier-going. But the show avoids disappearing up its own posterior by refusing to get dragged down into cynicism. The ultimate message of the show is upbeat and hopeful, which is what elevates it beyond being yet another modern TV show wallowing in grimdark.

Russian Doll is a fascinating show to watch, a puzzle which the viewers can unpick at the same time as the characters. Is the time loop being generated by Natasha herself due to her tragic family backstory or an external force? Is the building's unusual history to blame? Was is the drugs Natasha was taking at the time? Was it one of the people she spoke to at the party? Each of the show's eight episodes adopts a fresh take on the concept and develops it further, going far beyond the usual surface exploration of the idea that movies can allow. But the show avoids repetition smartly by throwing a few massive curveballs into the story, which gives it new angles to explore and keeps things fresh up until the end of the story.

Russian Doll is also brilliantly paced. Eight episodes, each less than 40 minutes long, means it has time to explore the concept but not get too bogged down in the details. Each scene feels necessary, well-thought out and vital towards resolving what it is going on. The only major downside to the series is one that is more potential than actual: Russian Doll was pitched as a three-season show and I literally can't see where two more seasons would take the story. They certainly aren't necessary, as Season 1 ends in a strong manner. At the same time, after this season I wouldn't bet against the production team producing something else worthwhile.

Russian Doll (*****) is a thought-provoking meditation on life, death and existence. It's part science fiction, part hipster dramedy and part existential thriller. It's the best thing Netflix has put out in a good few years and is well worth a watch. It is available worldwide on Netflix now.
Posted by Adam Whitehead at 15:42