In 1998 the Valve Corporation released a first-person shooter named Half-Life into a somewhat crowded marketplace. When the dust had settled, their title had been acclaimed one of the single greatest games of all time and had won a frankly obscene number of awards. They achieved this by creating arguably one of the most immersive game models of all time (eschewing narrative breaks from the action in favour of game engine cut scenes and never letting the protagonist speak, breaking the spell that 'you' are the hero) and combining it with high-level production values and playtesting the game until it hurt. Through two expansions and a much-delayed full sequel, Valve kept the Half-Life series right at the top of its field, picking up accolades galore.

However, the six-year development cycle for Half-Life 2 (released at the end of 2004) was a cause for concern, and Valve hit upon the idea of breaking the planned Half-Life 3 into three lesser chunks of 4-5 hours apiece and releasing them at six-month intervals, minimising the wait for them and allowing them to modestly improve the Source game engine between each release rather than having to revamp it from scratch, which is what a full sequel would demand. This plan soon ran into problems, with Episode 1 arriving in Summer 2006 months behind schedule and then Episode 2 being delayed again, again and then again until it finally arrived eighteen months late. Hardcore fans were understandably annoyed, but Valve sought to placate them by releasing Episode 2 alongside the even-more-delayed Team Fortress 2 (in development since 1999, believe it or not) and what at first glance appeared to be a throwaway puzzle mini-game called Portal. More on that in a sec. The whole package was dubbed The Orange Box, and was released for the PC, X-Box 360 and PlayStation 3 a couple of months ago. 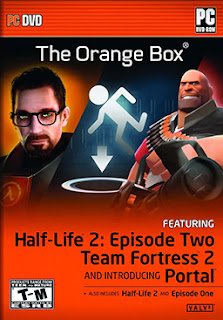 First to the meat of the package, Episode 2 itself. Episode 1 ended with Gordon Freeman and Alyx Vance fleeing City 17 as it was consumed by a colossal explosion. Episode 2 picks up with our heroes abandoned in the countryside and having to make their way to the White Forest resistance base, where the rebels have secreted a project that could shut off the Combine from Earth altogether and give the human race a chance to rebuild. Along the way they have to brave antlion tunnels and numerous homesteads and outdoor areas where the Combine are on patrol.

To a certain extent, Episode 2 thus suffers from 'middle-of-trilogy' syndrome. Nothing is really resolved and large chunks of the game consist of trying to get from Point A to Point C without being killed by Gun-Wielding Maniacs at Point B. That is fine and arguably large chunks of prior Half-Life games consisted of the same set-up. However, this formula (travel-set piece-travel-puzzle-set piece) is getting a little bit old now and having an entire game based around it makes it especially feel limited, especially with new, hungrier games like BioShock and Crysis innovating like there is no tomorrow. The game also suffers from the most terminally boring opening to a Half-Life game to date. In a series which has some of the most atmospheric, immersive openings in computer game history, Valve choose to open Episode 2 with Gordon squabbling around in holes in the ground splatting bugs. Bizarre.

That's the criticism out of the way. Onto the good stuff. Once more, for most of the game you team up with Alyx Vance, who is still the most impressive AI-controlled ally character ever seen in a game. It's a shame there's no co-op mode where a second player can take control of her, but she's so good at covering your ass in combat and not getting in your way that it often feels like there's someone else playing anyway, which is a remarkable feat. When Alyx isn't able to accompany you, you get to team up with one of the vortigaunts, the electricity-wielding enemy aliens from the first game who are now your allies. The vortigaunt's bizarre diction and somewhat over-eager praise (not to mention their occasional descent into sarcasm) provides most of the comic highlights of the game, as well as a few knowing self-referential asides (the vortigaunts seem well aware of the prevalence of physics puzzles in the Half-Life universe and Gordon's uncanny ability to solve them). You're soon given a nifty vehicle and Alyx is back in the driving seat, dealing out the pain alongside you as you engage in a running battle to get to White Forest.

It's during this section of the game that you encounter the two new enemies. The Hunters are mini-Striders who are incredibly tough and have possibly the most powerful offensive weapons seen by any Combine characters to date. Whilst you soon work out strategies for killing them, they remain a tough and challenging foe, powered by some fiendish AI. The Advisors are a very different kettle of fish, having psychic and telekinetic powers which virtually render you helpless in their presence and generally relying on circumstances or unaffected allies to help you out. This makes facing them rather annoying (as they're there to railroad you into the next bit of the plot rather than serve as viable, defeatable enemies) but they are used very sparingly.

After you arrive at White Forest, it's time to defend the base from a massive onslaught of Hunters and Striders using a new high-tech bomb you have to attach to the enemy vehicles with the gravity gun. This section of the game was massively hyped-up in press releases, which spoke of an epic battle involving hundreds of rebel soldiers and enemy forces fighting a pitched battle across a huge chunk of countryside. In reality, the battle lasts about ten minutes, the area of countryside is remarkably small, the other rebel soldiers are virtually useless (since the Striders are now inexplicably invulnerable to the same rockets you killed them with in Half-Life 2 and Episode 1) and the Strider-busting bomb is rather clumsy to use. Once you hit on a winning strategy though, it becomes rather tiresomely easy. Still, this can be forgiven for the absolutely shocking ending to the game which leaves the player reeling and waiting anxiously for news about Episode 3's release.

Whilst Episode 2 is the second-weakest Half-Life game to date (only Blue Shift was less satisfying), neverless it is still a fun, enjoyable game. It is short - only five hours or so - but it packs in a fair amount of variety in that time. Veteren Half-Life players will no doubt be punching the air as some plot elements from earlier games - including one vital piece of information going right back to the start of the original Half-Life itself - are finally explained and resolved, but it isn't long before many more questions are raised. The final scene is absolutely terrific, leaving you wanting to know what happens next.

Half-Life 2: Episode 2 (***½) is a solid game but not as revolutionary as earlier titles in the series. Nevertheless, it's good to spend time back in that universe with familiar characters and get a few more clues as to what the hell is actually going on.

"[...] and what at first glance appeared to be a throwaway puzzle mini-game called Portal. More on that in a sec."

So, what about this Portal game? You never got back to it in the review.

Thar's because my Internet connection imploded shortly afterwards. The Portal review will go up later on, assuming the connection stays up...