The world of Alifros is dominated by two mighty nations. The Empire of the Mzithrin lies in the west, unified under the rule of its five kings and in the worship of the religion of the Black Casket.
In the east, proud Arqual extends its powers over vast regions of land and sea. Forty years have passed since the last, bloody war between these two superpowers and an uneasy peace lingers between them, whilst the small, independent kingdoms of the Crownless Lands lie between them as buffers.

It is a time of great change, however. His Imperial Majesty, the Emperor of Arqual, has decreed that a lasting peace shall be forged between Mzithrin and Arqual and his greatest military commander, Admiral Isiq, has agreed to give up his only daughter, Thasha, in marriage to a royal prince of the Mzithrin. It is only fitting that the greatest ship in the Arquali navy, and the most infamous ship in the world, should be given this task. The I.M.S. Chathrand is the last of the Great Ships, heavily armed and crewed by a thousand souls, the only ship capable of crossing the vast Ruling Sea. But on this mission the Chathrand takes a strange assortment of passengers and crew, from the delusional Captain Nilus Rose to Pazel Pathkendle, a tarboy with many secrets, and from the sickly Admiral Isiq and his proud daughter to the dimunitive ixchel or crawlies, the little people whose presence on ships is taken as a sign of doom. As ancient secrets are revealed and dark conspiracies are unmasked, the crew and passengers of the Chathrand come to realise that they are at the centre of events that will reshape their world. 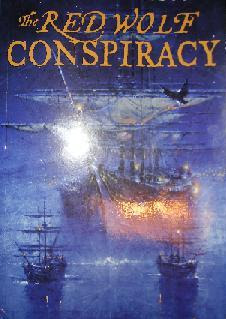 The Red Wolf Conspiracy is the opening volume of The Chathrand Voyage, a fantasy trilogy by debut author Robert V.S. Redick. Gollancz's pre-publicity draws comparisons with Scott Lynch and Philip Pullman, and I suspect over the coming months a similar word-of-mouth pre-release excitment will build that is comparable to Lynch's The Lies of Locke Lamora or Rothfuss' The Name of the Wind. Certainly The Red Wolf Conspiracy is an exceptionally fine novel and more than worthy of such comparisons.

With this book, Redick creates an incredibly rich fantasy world where familiar archetypes like wizards and scheming nobles are given fresh spins, and where every chapter seems to deliver a new idea, concept or race. Redick creates vivid images in the reader's mind, from the disturbing Flikkermen with their glowing innards to the hordes of scurrying ixchel to the towering augrongs and the 'woken' animals who have spontaneously developed sentience (I suspect this is where the Pullman comparisons come from). His core characters are similarly varied and intriguing, although our two central protagonists, Pazel and Thasha, are perhaps a bit too familiar as archetypes. Whilst they are well-drawn as characters, arguably it is the secondary cast that draws more attention. The crew of the Chanthred in particular are an intriguing bunch, especially as we discover more about them through their log entries and Suzanna Clarke-style footnotes (though nowhere near as numerous or long). Fans of nautical fantasy will find much to their liking here, but whilst Redick has clearly done his homework he doesn't let the minutiae of shipboard life detract from the story, and I suspect those who normally dislike martime tales may find this story much more enjoyable.

With such a vivid world to bring to life, Redick could perhaps be forgiven for relaxing on the plot side of things, but instead the storyline fairly rips along, packed with excitement, incident and humour which builds to a conclusion that, whilst certainly leaving the reader wanting more, could perhaps be said to be anti-climatic. With two more books still to come, perhaps this is unavoidable.

The Red Wolf Conspiracy (****) is an extremely enjoyable epic fantasy tale set in a vivid , constantly inventive world. The Chathrand itself comes across as the ocean-going equivalent of Gormenghast, whilst its crew seem to have assembled variously from the works of Charles Dickens, Jack Vance and Scott Lynch, but with a style that is undeniably Redick's own. I suspect that Redick will be 'the' big new fantasy author of 2008, and deservedly so.

The Red Wolf Conspiracy will be published in hardcover and trade paperback in the UK on 21 February 2008. The UK Gollancz editions are also freely available for pre-order in the US. Gollancz have a page on the book here, including a map of the world of Alifros.
Posted by Adam Whitehead at 22:18

Sounds interesting! I'll put it on my debut calendar and start watching for all that buzz.

Looks like a good'un. I'll be keeping an eye out for this one. Nice review as well.

Thank you, Mr. Whitehead, for this thoughtful review. As it happens Gollancz has moved up the release of Red Wolf to February 1st, 2008, apparently at the request of Waterstone's Books.

If you'd like to see proof that fiction writers shouldn't be trusted to build their own websites, have a look at my own, redwolfconspiracy.com.
Best wishes,

I've just posted my interview with Robert :) Your great review of the book prompted me to contact him in the first place :D

Do you plan to review "The rats and the ruling sea"?

Yes, eventually. I've left it rather a long time now, so I'm now thinking about waiting until all four are out and reading them then.

Any plans to review Master Assassin, by Redick? I had heard nothing about it, but saw it in a bookstore. It has Pat Rothfuss and Mark Lawrence saying very nice things about it, so I'm curious. However, I felt his first series ran out of steam, so am also a bit cautious ....