Kate Elliott is the author of the highly successful Crown of Stars series, which I reviewed earlier this year. Crossroads is her new series, a seven-volume series which is divided into two trilogies with a linking book between them. Spirit Gate is the first book of the first trilogy (to be followed by Shadow Gate and Traitor's Gate). 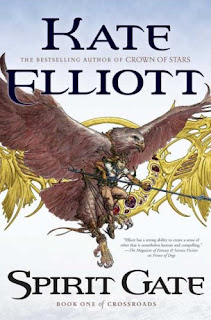 For centuries the land of the Hundred was ruled by the Guardians, powerful beings to dispensed justice, aided by their reeves, effectively a police force riding giant eagles. The Guardians have disappeared and are feared dead, but the reevers remain, overstretched and in increasingly few numbers as chaos and barbarism spreads across the land. Reeve Joss is given the difficult task of restoring order to an area in the south ravaged of bandit attacks, threatening trade between the Hundred and the Sirniakan Empire to the south-west.

Meanwhile, in lands far beyond the Hundred and the Empire, a Qin warrior named Aniji marries a local woman, Mei, and finds himself and his troop of 200 soldiers drawn into danger and adventure, forcing them to flee their lands and journey into the Hundred, where they find the land on the brink of full-scale war.

Spirit Gate is a compelling story set in an interesting and well-realised world. Whilst Crown of Stars was deliberately set in a very rigid society highly reminiscent of medieval Europe, Crossroads is far more original and fantastical, although the two works share some character tropes and ideas. The book opens with a nice piece of misdirection that holds the attention and directs the reader into the story. However, the pacing is mismatched and key characters, most notably Joss, disappear for long stretches. In other places the timeline is a bit confused, with Elliott not being afraid to revisit the events of several chapters past from another POV, although once you get used to it this plot device does start yielding useful information. There is also a rather odd tendency for central characters to engage in frivolous discussions and banter in the middle of mortal danger, which defuses tension from the book, and after a very impressive build-up to a major confrontation at the end of the book, the actual final battle is resolved in perhaps two pages at best, which is very disappointing.

On the plus side, the relationship between the reeves and their eagles is well-defined. Those fearing that the giant eagles were going to be reduced to cuddly sidekicks can rest assured that these animals are depicted as the dangerous creatures they are. The idea that the reeves are policemen and not soldiers is also nicely done and leads to some interesting exploration of the roles of the police and the military in a fantasy world.

Unfortunately, the central threat in the book is left rather vauge and undefined. Is chaos and lawlessness returning in general because the Guardians are gone and some people are taking advantage of it, or is there a much darker master plan at work? Elliott hints at both possibilities but never really gives us enough information to come to a conclusion.

Spirit Gate (***) is an enjoyable and solid fantasy novel with some very nice ideas which doesn't entirely come together satisfyingly. Still, the novel leaves me intrigued to read the sequel, which I suppose is its main objective. The novel is published by Tor in the United States in paperback, and by Orbit in the UK in trade paperback and mass-market paperback. The sequel, Shadow Gate, is released in the UK on 3 April 2008 and in the USA on 15 April 2008.
Posted by Adam Whitehead at 18:20

I'm going to have to give this another go sometime :) I have a copy (my own, for once!) but never got through it (I was distracted by The Name of the Wind and never looked back!)

I trust you had a good Xmas and New Year?! :D

Thanks for this thoughtful review. I appreciate it.