The Children of Húrin by J.R.R. Tolkien

Given that J.R.R. Tolkien died in 1973, the publication of a 'new' novel by him earlier this year provoked a storm of controversy among readers. Of course, this is not the first time that a posthumous Tolkien works has appeared, but it was the first time that such a work had appeared without Tolkien's express permission from prior to his death (as with The Silmarillion) and shorn of substantial editorial coverage explaining the work's origins (as with Unfinished Tales and the twelve-volume History of Middle-earth series). As a result some heated discussion has taken place debating the book's validity and status within the Middle-earth 'canon'.

Despite this, a foreward and afterword by Christopher Tolkien does explain broadly how this book came about, namely through the combination of several distinct narratives that had appeared previously, and indeed all of the work in the book is J.R.R. Tolkien's own, with no linking passages created by his son. As such The Children of Húrin can be enjoyed in its own right, with no concerns over this being a Kevin J. Anderson/Brian Herbert-style cash-in. 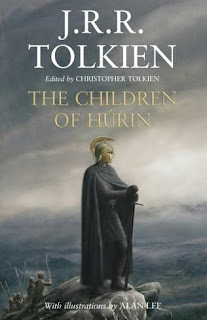 The story of The Children of Húrin has been told several times before. A brief form appears in The Silmarillion (1977) whilst Unfinished Tales (1980) contains a much longer narrative, which indeed forms the majority of the work in this book. To anyone who already owns Unfinished Tales, I would suggest borrowing The Children of Húrin prior to purchase as Unfinished Tales already contains the majority of this story and it may be redundant to purchase it again. However, there is a substantial addition of new material near the start of the story and there are of course Alan Lee's gorgeous illustrations, which are worth the price of the book by itself.

The story is set in the First Age of Middle-earth, approximately 6,600 years before the events of The Lord of the Rings. Morgoth, the first and much more powerful Dark Lord, has stolen the Silmarils, the great jewels of light forged by the elven master-craftsman Feanor. Feanor's people, the Noldor, have made war upon Morgoth for over four centuries to recover the Silmarils, but after early successes the conflict has turned against them. Feanor and his brother Fingolfin are dead and Beleriand - the subcontinent that used to lie west of the Blue Mountains - is now overrun by Morgoth's troops. In the Battle of Unnumbered Tears the last great army assembled by the elves and their human and dwarven allies is destroyed and Húrin, a great human warrior and leader, is captured by Morgoth. Húrin taunts Morgoth to his face and Morgoth lays down a horrendous curse on Morgoth and his kin. As the story unfolds we follow the fortunes and misfortunes of Húrin's children, particularly his son Túrin, as the curse engulfs them.

This is not a happy story. Even the bitterseet end of Lord of the Rings may not prepare the reader for the sheer tragic power of this tale. Very, very few characters reach the end alive and for all of the victories that are won, the losses are far more vividly described. Those looking for an uplifting story are directed to The Hobbit. In The Children of Húrin we see Tolkien's gift for myth-making in full force. This is a dark, powerful and wrenching tale which is deeply affecting to read.

However, there are some issues. Tolkien wrote the bulk of this narrative after completing Lord of the Rings but it is based on considerably older ideas, conceptions and drafts, and he deliberately employs a prose style even more archaic than some of the later chapters of Lord of the Rings. It is certainly not among Tolkien's easier-to-read works. To those who 'get' the voice Tolkien employs, however, the story is compelling. The other problems are related to the book's length. This is not a long story and despite the publishers going to some lengths to increase the page-count (including putting startlingly large margins around the edges and employing a notably large font size) and throwing new maps, appendices, forewards and afterwords into the mix, it is still a relatively short story (perhaps half the length of The Hobbit at absolute best) for the money they are asking for, especially as the bulk of it can be found in other, longer and more varied works . As I said earlier this is offset by the inclusion of numerous black-and-white illustrations and several full-colour plates by Alan Lee which are incredibly atmospheric and add to the reading experience intensely. Another disappointment is that Christopher Tolkien did not find a way of including the later adventures of Húrin in the book as some kind of postscript (for those inclined, several versions of this narrative can be found in The War of the Jewels, the eleventh volume of The History of Middle-earth series), but arguably this would have been out of place in a book about his children, not the man himsef.

The Children of Húrin (****) is a haunting, gripping story, probably the darkest thing Tolkien ever wrote and it stands alone remarkably well. Those who found The Lord of the Rings not to their liking will probably like this even less and casual fans may find the prose style offputting, but to the serious appreciator of Middle-earth and Tolkien's work, this is a handsome (if rather brief) volume with superb illustrations and is worth a serious look.

The book is available from HarperCollins in the UK in hardcover. A paperback edition will follow on 7 April 2008. The book is published by Houghton Mifflin in the USA in hardcover.
Posted by Adam Whitehead at 17:34

Certainly the darkest tale i've read from tolkien, it holds a sense of despair and is very burdensome on the heart. But no less masterful a creation for all its depressing airs.