Last Argument of Kings is the third and concluding volume of The First Law Trilogy, following on from The Blade Itself (reviewed here) and Before They Are Hanged (reviewed here). Those who have not read the first two volumes may wish to skip the plot summary as it does contain spoilers of events in those books.

In the frozen wastes of Angland, the army of the Union and its allies continues to wage war against Bethod and his forces. The Gurkish, having retaken Dagoska, now develop new and more bold plans to continue to wage war against the Union from the south. And, having failed in their quest to the far side of the world, Bayaz and his companions return to the city of Adua to make new preperations for the conflicts to come. But in this struggle it becomes clear that different factions are scheming for power, that those who are allies one day may be bitter foes the next, and that the price of victory may be far too high... 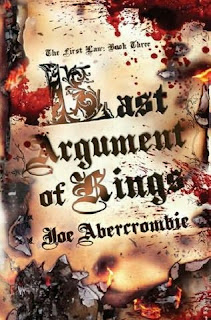 The First Law has attracted a great deal of praise since the publication of The Blade Itself a little under two years ago. Abercrombie's clear style delivered an apparently 'straightforward' fantasy tale with some interesting ruthless edges to it. Before They Are Hanged forced the reader to revise a lot of what they thought they knew whilst putting several key twists into the story that were unexpected. Last Argument of Kings delivers exactly what this trilogy needed: a no-holds-barred war story in which secrets are exposed, mysteries are explained and the author resolutely refuses to pull any punches. Those expecting a gloriously happy, neat ending to this trilogy best look elsewhere.

Instead, we get huge battle sequences, including one that threatens to displace the supremacy of Steven Erikson's siege of Capustan from Memories of Ice as the greatest epic fantasy battle this century. We get more intricate, devious politics. We get more torture, courtesy of our friend Glokta (whose character arc remains the most vivid and engrossing of the series). The deepening of the character of Bayaz, who first turned up looking like a jovial Belgarath-style wizard and is now revealed to have a lot more going on to him than just that, is also tremendously satisfying. To those who have taken part in debate on various fan forums (particularly on Westeros.org) some plot elements may emerge as rather predictable, at least until Abercrombie pulls the rug out from under your feet and, just for giggles, does it again a few chapters later. Best of all is the way quite small storyline elements from the previous two books are revisited and minor charaters of no great significance are now revealed to have their own important roles to play.

The ending is superb, particularly the tremendously satisfying epilogue and the final scene. Enough loose ends are left that Abercrombie could revisit the storyline in future books or series, but not to the extent that it is a necessity. Life goes on, albeit in a manner which some characters (and perhaps some readers) find criminally unfair. We also get enough clues laid about other, hitherto undeveloped parts of the world such as Styria that the news that the author's next novel, Best Served Cold, will be set there is most welcome. However, for the time being at least, we must bid a fond farewell to Superior Glokta, the redoubtable Jezal, the secretive Bayaz, the proud Ardee, the solid Colonel West and, of course, the Bloody-Nine. I look forward to the day when we catch up with them and their adventures once more.

Last Argument of Kings (****½) is a more than worthy conclusion to this trilogy. The novel will be published by Gollancz in the UK on 20 March 2008 in hardcover and trade paperback and by Pyr Books in the USA in September 2008.
Posted by Adam Whitehead at 17:31

I am really looking forward to this. In a marketplace glutted with mediocre fantasy I still don't think this series has gotten the recognition it deserves. Blog reviews like this will certainly help to correct the situation.

Nice review. Am looking forward to this book. Although I didn't think the first two were jaw-droppingly brilliant, I enjoyed them, liked many of the characters and care enough to want to know what happens to them! :)

The first two were really good fantasy books and I can't wait to see the conclusion. I'm gunning for Ninefingers to join the Dogman and the others and kick some rear lol.

Logan isn't dead...you and I both know that. But someone should have died imo.

Perhaps I just love GRRM too much.

Well, one fairly major character did die, and arguably the one who seemed least likely to. That's the way it goes, I suppose.

But granted that the major players did all survive.