I have received some queries asking about Brandon Sanderson's prior record as a novelist before taking on the challenge of the final Wheel of Time novel. As a result, here is my pre-blog review of his first novel, Elantris (2005), reprinted for your convenience.

Elantris is the first novel by American author Brandon Sanderson. Refreshingly, it is not the first book in a series, but a self-contained novel in itself (although there are a few loose ends left dangling for possible sequels). 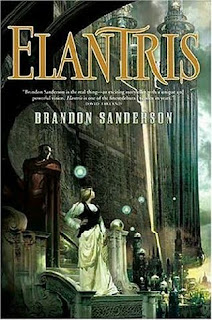 The plot starts off in a traditional manner. The kingdoms of Teod and Arelon is in danger of being swallowed up by their expansionist neighbour, Fjordell, whose religions brooks no rivals. Cue a desperate battle in Arelon and its capital, Kae, as various nobles and merchants race to either ingratiate themselves with the Fjordell or find a way of resisting them.

The more original element of the story is that up until a decade ago, Arelon was protected by the Elantrians, god-like beings with total mastery of magic. Occasionally, humans would be unexpectedly transformed into Elantrians by an apparently random magical process. However, something went wrong. The Elantrians' magic failed and they were transformed from demigods into cursed wretches who are permanantly affected by pain. Every time they suffer an injury, from a stubbed toe to a cut to a broken neck, the pain stays with them permanantly. Unless burned or decapitated, they are also immortal, so a broken back or neck is simply a condemnation to agony rather than death. Unsurprisingly, a lot of the Elantrians are catatonic or totally insane. Their city, Elantris, stands alongside Kae and is now quarantined, with humans transformed into Elantrians thrown into the city and forgotten about.

The novel follows the storylines of three characters: Prince Raoden of Arelon, who is unexpectedly transformed into an Elantrian and thrown into the city, where he tries to make a better life for the people of the cursed city; Hrathen, the Fjordese priest who has three months to willingly convert the populace of Arelon before a major invasion is launched; and Princess Sarene of Tedo, betrothed to Raoden but now immersed in the labyrinth of Arelese politics.

The novel is fast-paced, and generally entertaining throughout. Sanderson is not going to be winning major prizes for his prose, which is effective but somewhat uninspired in places, with occasional over-reliance on exposition. That said, his ideas and execution of plot are pretty good. Hrathen could very easily have been turned into the 'evil priest' cliche but Sanderson gives him real depth and humanity. And, after reading books where the main characters do very stupid things very frequently, Sarene is a refreshingly canny character, although occasionally this thretens to tilt the other way and turn Sarene into a Kellhus-like character (see Bakker's Prince of Nothing Trilogy) who can read people's intentions just by looking them. Sanderson just dodges the bullet on that one. The lack of any magic in the book for about 85% of its length is also refreshing and, when it does come, it's obvious Sanderson has put some thought into it.

There are some other major problems, though. The ending could be described as a bit too neat. And the absolute explosion of 'twists' (some predictable, some not) and an unexpectedly huge amount of magic use in the final part of the book threaten to make the ending implausible and a bit OTT.

Overall, this is an enjoyable 'typical' epic fantasy novel, with some neat ideas and reasonable character development. The prose could do with some work and Sanderson needs to pace his endings slightly better, but overall this is a fun book, and a superior alternative to the likes of Brooks and Eddings. I think fans of JV Jones, Kate Elliott and possibly Raymond Feist would enjoy it.

Elantris (***½) is not published in the UK at present, but US paperbacks are available at Amazon.co.uk. Sanderson's other novels are the first two volumes in The Mistborn Trilogy, The Final Empire and The Well of Ascension, with a third, The Hero of Ages, due next year. Sanderson has a website at this location.
Posted by Adam Whitehead at 14:57

Sorry, I know this has nothing to do with the post, but I'm taking a little break from Fantasy Book Critic for a couple of weeks so I just wanted to wish you Happy Holidays and a Happy New Year!!!