Historical novelist George MacDonald Fraser passed away yesterday from cancer, at the age of 82. Fraser was an accomplished journalist and writer, best known for his Flashman Papers series of historical novels, which ran to twelve volumes published between 1969 and 2005, as well as six other novels, two memoirs and a book about making historical movies in the Hollywood system. His last published work was the novel The Reavers, which was published in October 2007. He also penned eight screenplays (including the James Bond movie Octopussy and some drafts of the fantasy movie Red Sonja). He also served in the military, with the Border Regiment of the 17th Indian Infantry Division during WWII and then with the Gordon Highlanders after the war. 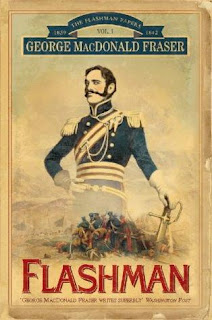 Fraser was a talented writer with an eye and ear for character and dialogue. His Flashman novels - which inspired Bernard Cornwell and George R.R. Martin among others - are exceptionally fine historical novels, concentrating on the adventures of the rakish and cowardly Harry Flashman who somehow comes out of every situation smelling of roses and covered in glory. Whilst it is sad that Flashman's full adventures will never be told (Fraser had planned several more Flashman stories, allegedly including his much-anticipated American Civil War epic), the existing books represent an accomplished and enjoyable body of work, and I thoroughly recommend them to any fan of historical fiction.

An adaption of the Flashman novels for television has been rumoured for many years, with recently Picture Palace and Celtic Films (the two companies who brough Sharpe to the screen) confirming they were working on an adaption of Flashman at the Charge with Fraser's involvement and, it was rumoured, Rome's James Purefoy (Mark Anthony) as a possible Flashman. This would be perfect casting if the project goes ahead.

I'm really sad to hear this. I remember when I was young taking the Flashman books out of the library to read. Highly recommended for anyone who likes some fascinating historical events combined with rakish humor. I never read the whole series, I guess because there was such a large gap between when the books came out and I drifted away to other interests. Maybe it's time to revisit them.

At their best the Flashman novels were wonderful. I wrote about the last one published in GMF's lifetime here - http://www.socialaffairsunit.org.uk/blog/archives/000405.php - while I do think that a law of diminishing returns does apply to multi-volume novels featuring the same character, Flashman is still a wonderful creation and MacDonald Fraser's universe a brilliant recreation of the past.