Dying of the Light by George RR Martin

Worlorn is a world without a sun, ejected from its home system by a supernova millions of years ago and now hurtling out of the Galaxy. For a few years as it passed the colossal red supergiant Fat Satan and is attendant stars Worlon became a Festival Planet, with millions flocking from the outer worlds to spend a decade partying before it passed beyond the edge of the Galaxy. Now the Festival is over, its peoples all but gone, leaving behind a few die-hards determined to stay as long as possible before the planet freezes and becomes cloaked in eternal night.

Dirk t'Larien is summoned to Worlorn by his former lover, Gwen Delvano, for a reason she will not specify. On Worlorn Dirk finds Gwen the lover and bonded partner of Jaantony Riv Wolf high-Ironjade Vikary, a visionary leader from the barbarous world of High Kavalaan, but as he learns more about the Kavalar he becomes convinced that Gwen is trapped in a life she does not want. However, as Worlon passes into the night, greater stakes are raised and Dirk finds himself caught in a desperate struggle for survival. 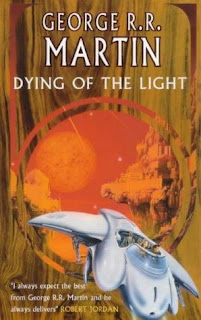 Dying of the Light was George RR Martin's first novel, published in 1977. It is set in his SF 'Thousand World's' mileu, but no prior knowledge of the setting is required. As GRRM's first experience of the long-form novel, it is perhaps unsurprising that Dying of the Light is somewhat rough around the edges, lacking the trademark expert pacing of his later works. The first half of the novel is terribly drawn out. Whilst Worlorn, its flora and fauna and its dying cities are beautifully described, there is the feeling of the plot meandering around without a purpose for a while. In the second half, the book's various strands coalesce into a much more driven storyline and the pacing ramps up to the ambiguous finale in a manner which is classic GRRM.

The protagonists are well-drawn. Once again (see also many of the short stories in Dreamsongs), anyone who has been been through a painful or awkward relationship can identify with GRRM's main characters, Dirk and Gwen. The Kavalar are also a well-drawn species, whose complex codes of honour are logical, although the exploitation of legalistic loopholes in their traditions and customs occasionally makes the book feel like a 'Klingon honour' episode of Star Trek. Some may also bemoan the Butch & Sundance-style ending.

Overall, the novel has aged reasonably well, although the odd pacing means the first half of the book has a tendency to drag somewhat. Once the reader hits the second half of the novel, however, things improve immeasurably. As usual, it's fun finding precursors to George's later work (particularly the similarities between Bretan and A Song of Ice and Fire's Sandor Clegane), but Dying of the Light is a somewhat slight work compared to ASoIaF, Fevre Dream or The Armageddon Rag.

Dying of the Light (***½) is published by Gollancz in the United Kingdom and by Bantam Spectra in the United States.
Posted by Adam Whitehead at 18:13

I was a big Martin fan in the days when he was a sf writer. Even though this is rough, it was a good first novel. Not as strong as his short stories but I thought it was above average. Now I just need to start reading his fantasy books.