Chell, a test subject at Aperture Science, has successfully destroyed the insane AI known as GLaDOS and escaped from the facility. Unfortunately, injured in the final battle, she was 'rescued' by a robot from the facility and returned to cold storage. Awakening many years later, Chell finds herself once against trapped in the facility. With the help of a friendly AI, Wheatley, she must flee once more...something made harder when GLaDOS is brought back online. 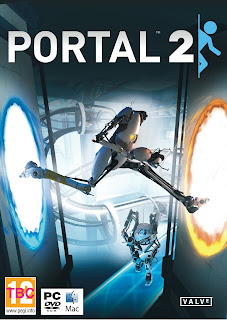 Released in 2007 as an add-on to the 'Orange Box' compilation, Portal was a surprise success for its developers, Valve. It won several Game of the Year awards and glowing plaudits for its conciseness and the cleverness of its central mechanic, not to mention the frequently hilarious writing (and the brilliant closing song). Portal 2 has a lot to live up to and is put in a difficult situation for a sequel. Sequels are usually bigger, more epic and larger in scale than the original, but the Portal concept wouldn't really work on a vaster canvas. Making a sequel to Portal that respected the original game without ruining the things that made it brilliant would therefore appear to be a tall order.

Happily, Valve have pulled it off. From start to finish Portal 2 is almost unimpeded brilliance. The game is longer than Portal, coming in at about eight hours compared to the original's three. Since even the splendid original game was risking becoming stale at the end, Valve have split the sequel into three clear sections. In the first Chell uses portals very much as in the first game and is aided by Wheatley and opposed by GLaDOS. At the end of this sequence Chell finds herself in the most ancient parts of the facility, where a very different set of puzzles await using different mechanics. In this section she has no enemies or opponents but is guided through the puzzles via messages pre-recorded by Aperture Science's long-deceased founder, Cave Johnson. After this she returns to the upper levels where an all-new set of challenges await, leading to the epic conclusion.

As such Valve neatly avoid what could have been the game's biggest pitfall, outliving its welcome. The shifts in tone, plot and game mechanics are handled well, but still combine to form a coherent game. The cast has been enlarged with the addition of Stephen Merchant (Ricky Gervais's wingman, who increasingly is outshining his partner) as Wheatley. Valve wanted a completely different type of vocal performance for Wheatley then you normally get in a video game and Merchant's half-ad-libbed dialogue is different and more immediate, not to mention hilarious. J.K. Simmons (best-known as J. Jonah Jameson in the Raimi Spider-Man movies) provides the recorded voice of Cave Johnson and his deadpan delivery of increasingly deranged dialogue is also excellent. Ellen McLain also returns as GLaDOS and, in one of the more inspired ideas in the game, is given more dramatic meat to work with as GLaDOS begins to suffer an immense internal struggle as she and Chell discover the secret past of Aperture Science.

Graphically, the game looks great with some impressive production design and animations. The Source Engine (eight years old in 2012) is definitely ageing, but nevertheless remains impressive. The puzzles are fairly fiendish and require some lateral thinking in order to make sense of all the new elements ('paints' that give different effects to surfaces, catapults that throw the player around, tractor beams and light-bridges), but the gradual introduction of these elements allows the player to get to grips with them effectively. There's a few puzzles near the end of the game that are really tough, but nothing too frustrating. More complex are the puzzles in co-op mode, but with two players working on solutions these shouldn't be too much of a problem.

Events in the game build and culminate in the final battle, which is once again impressive. However, the finale of the game must rank amongst the most bizarre - but also brilliant - in gaming history. From the unexpected opera serenade to Wheatley's closing, introspective monologue it's thoroughly entertaining. Things are left open for the continuation of Chell's story (either in further Portal games or possibly future Half-Life titles) but there is no cliffhanger.