The Black Company - or rather the handful of its survivors - has broken ranks with the armies of the Lady and sworn its allegiance to the White Rose, who is prophecised to bring the Lady down. But the Lady's armies have besieged the Plains of Fear, hemming the Company and their allies in. As the threat draws in, Croaker, annalist of the Company, receives anonymous messages relating how the wizard Bomanz awoke the Lady and the Taken in the first place. As events unfold, it becomes clear that the Lady's husband, the evil Dominator, is planning his own return to the world, a prospect that cows even the Lady, and that the growing war will soon develop a third side. 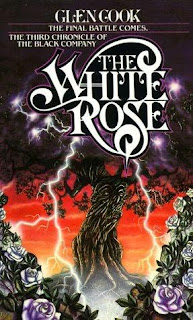 The White Rose concludes the original Black Company trilogy, wrapping up story and character arcs begun back in The Black Company and continued in Shadows Linger. Based on those two books, the reader might go into this novel expecting a massive magical conflageration and battles of mythic proportions. Again, Cook blindsides the reader by crafting something far less predictable and much, much weirder.

Much of the book takes place on the Plains of Fear, an area warped into what can only be called surrealness by the presence of a god manifesting as a tree. Talking, teleporting menhirs warn of strangers on the plain, whilst flying manta rays and immense windwhales pass overhead. These chapters are more akin to the New Weird than anything in the epic fantasy canon, and keeps things fresh and offbeat. After this sequence the story moves to the Barrowland, the prison of the evil Dominator, where an unlikely alliance of convenience must be struck in order to ensure the Dominator's destruction.

The White Rose is certainly not the ending that I think anyone was expecting, but this is a good thing. Scenes where the apparently evil, amoral Taken and their mistress show their doubts and fears in the face of the threats of both the White Rose and the Dominator show an impressive degree of characterisation. Cook also reveals the backstory of the wizard Bomanz which shows that history has been rather unkind to him, and sets the warped version of history that Croaker and his friends are familiar with straight. Cook's succinct but still memorable prose and typical mastery of pace drives the story to a conclusion that it is expectation-defyingly small in scale, but nevertheless logical.

The White Rose is the third book of ten (so far) in the Black Company series, so obviously there is more story to come, but Cook brings things to a solid conclusion and the book has no cliffhanger for future books, making it an ideal pausing point for those not wishing to plough through the whole series in one go.

The White Rose (****½) shows Cook defying expectations once more and delivering a morally complex, atypical epic fantasy that is compelling to read. It is available in the UK and USA now as part of the Chronicles of the Black Company omnibus.
Posted by Adam Whitehead at 16:37

I posted this question already a week ago in your review of the first volume but didn't get an answer.

Maybe you didn't see it since I came kind of late to the game so I post it again here in hope of a positive answer:

"do you have any info on 'A Pitiless Rain' and 'Port of Shadows', the two final Black Company novels?

Cook has mentioned them at least as early as January 2005, when he said in an interview that he has "a bunch of other stuff [he has] to do first that's under contract. It will be several years before a new Black Company novel comes out."

With the concluding (?) Dread Empire novel 'A Path to Coldness of Heart' finally done, it might be only the fourth novel of his Instrumentalities of the Night series that's in the way, I hope!

I'm also wondering if the two BC short stories will be collected (maybe together with further BC stories?) sometime down the road. Would be nice."

My understanding is that the two books remain on Cook's schedule and that they don't have a release timetable at the moment.

Will have to keep being patient, then...