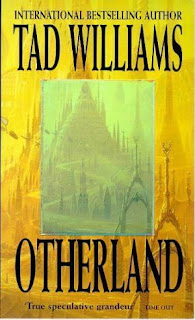 From the sound of the press release, the film producers are not planning a faithful adaptation, but will instead compress the 3,300-page story (in paperback) into a single two-hour movie. Expect about 5% of the plot from the books to end up on the screen.

An odd choice, it has to be said. Given Otherland's episodic nature, a 3-4 season TV adaptation is a much more logical way of adapting the series. Whilst the film may be entertaining, it will certainly not be a faithful adaptation of the books.

In the meantime, a free-to-play Otherland MMORPG will be released later this year by DTP Entertainment.
Posted by Adam Whitehead at 21:31

This was a great series, unfortunate if they are only making a 2 hour movie out of it. It almost never turns out good when they do stuff like that.

That's such sad news. I've always day dreamed about doing a faithful film adaptation, or tv series. It would be so amazing. Hopefully the film could set off enough interest in the series that someone actually does a faithful version.

Otherland, much like Alice through the looking glass, does get very repetitive after a while. The esscence of the film could be done in 2 hours easily- amnesiac man finds out the world he's in is artificial reality, falls for an angel who's dead and gets chased by the Other.

(think that's the gist, haven't re-read it since the final volume came out in hardback!)

Hollywood ruins almost everything they touch :-(