Six years after the mighty Battle at Charm, the Lady's Northern Empire has expanded further than ever before, carrying the Black Company into the distant lands of the east. However, orders come that will drive the Black Company on a march of thousands of miles to the far north-west, to the city of Juniper were mighty forces will clash as the result of the activities of one dirt-poor innkeeper. 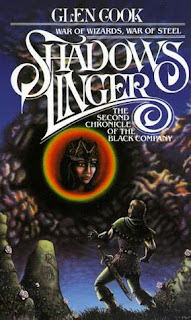 Shadows Linger is the second novel in The Black Company sequence and comes as a bit of a surprise for readers expecting more of the same. The Black Company was a vast war epic, huge in scope. Shadows Linger feels a lot smaller in scale and more intimate, with the bulk of the action taking place in the single city of Juniper and focusing on the troubled life of the innkeeper Marron Shed. This division of focus - between Juniper and the Black Company as they cross an entire continent to get there - requires Cook to adjust his POV structure from the first volume. Whilst the bulk of the action continues to be relayed by Croaker, annalist and physician of the Black Company, we also get third-person POV chapters focusing on Shed. Later it is revealed that Shed recounted his adventures in detail to Croaker, explaining how this structure works.

Cook is at home with the small-scale story as he is with the larger, and he is able to inject real fear and tension into the mundane storyline of Shed's debt worries. As the story continues, we realise how Shed's apparently irrelevant concerns are related to the bigger picture, and once the Black Company reaches Juniper we snap back to a larger, more epic story with far-reaching consequences for the characters (several major characters don't make it to the end of this one).

The story itself unfolds relentlessly, with superb pacing as we flick between Shed's activities, Croaker's narration and the third-hand reports of the Black Company's march on Juniper. There are also hints of genuinely weird and fantastical ideas here, such as the bizarre landscape of the Plain of Fear (which features much more strongly in the third volume) and the black castles which grow from seeds (which Erikson clearly cribbed for the Azath Houses in the Malazan sequence). There's a feeling of constant invention as Cook deploys weird and wonderful ideas and combines them with the more traditional military fantasy shenanigans he has set in motion.

Complaints are few. The timeline feels a little shaky (in order for it to work, Croaker has to spend months and months in Juniper, which doesn't feel the case in the book) but this is not particularly a major problem. A few characters established as major players in the book seem to end their story arcs with damp squibs or rather off-hand deaths, but this may be part of Cook's intended effect - not everyone is a hero and some people do just expire unexpectedly in undramatic fashion. There's also much more of an obvious cliffhanger for the third book, but given that the third book has been out for decades and is combined with the first two in omnibus editions, that's not particularly problematic either.

Shadows Linger (****½) is more than a worthy follow-up to The Black Company. It's a fast-paced, addictive read which sees Cook not resting on his laurels and trying some new approaches and ideas, and succeeding well. The novel is available as part of the Chronicles of the Black Company omnibus in the UK and USA.
Posted by Adam Whitehead at 12:51

Erikson cribbed it from Cook, the Castles (houses) that grow out of seeds-idea...but hasn't Jack Vance done it before Cook in his book, I believe it was called, 'The Houses of Iszm'? Or was that after Cook's book? I can't recall the year it was published...
Nice review though, perhaps I will try this when my to read-pile grows a little less intimidating ;-)

SO glad you are reviewing the Black Company novels! I am currently working my way through all of them at once. I'm on the 6th chronicle now - but before I started it I stopped down and read "The Silver Spike". (probably best to read it after the 4th book). Looking forward to your review of that one - a fantastic companion novel to the series with a ton of crazy action!
I just can't believe I never read these books until now. Very enjoyable - and a great trick Cook does in later books using other POV "annalists" - where you actually see another side to characters that changes your perception of them.