The paperback edition of The Crippled God has been released in the UK. The cover blurb includes a nice factoid: worldwide sales of The Malazan Book of the Fallen sequence have now passed 1 million copies. 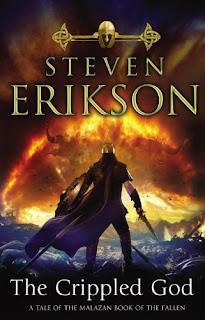 Splendid news! The Malazan series has been a bit of a slow-burn, taking seven years to sell 250,000 copies (as revealed in a press release when The Bonehunters came out). Selling an additional 750,000 copies in the next five years clearly shows the acceleration in sales (coinciding with the books coming out in the USA as well). Whilst it's not on the level of sales of some of the genre-leaders, it's still an impressive figure for such an allegedly 'difficult' series. Congratulations to Steven Erikson and his publishers.
Posted by Adam Whitehead at 19:16

Email ThisBlogThis!Share to TwitterShare to FacebookShare to Pinterest
Labels: news, steven erikson, the malazan book of the fallen

Great news, hopefully its popularity will grow and grow. Best series out there, easily.


Anny chance you could give us comparing numbers for the other big series out there Wert? I know you did it a couple of years ago, but it would be nice to get an update of the current situation.

It's got a looong way to go to catch up with other big name fantasy series. I don't like this series, but I'm surprised it has only sold 1M copies, given the recent publicity and the fact there's 10 books.

I have another question to other readers:
Is there any series that comes close to TMBotF in complexitiy and scale?
I would like to know the literature world a litte better but I doubt there was ever a bigger attempt.

I would say "The Wheel of Time" is the only one that is in the same league. Books 7-10 in that series are slow, but overall its a great series. Erikson is a much better writer than Jordan though.

I think it would help if you could actually go into a book store and buy the series in a single format.

Most stores simply don't stock anything resembling a coherent collection of the books. You get some that are only Mass Market Paperback, some that are Trade Paperback, some that they simply never have and can't order (memories of Ice is a particular pain to get in anything other than Mass Market).. The series also offers no roadmap of how to integrate the two authors works together.. And while for a serious fantasy reader that might not be that big of a deal.. it's something that I know from personal experience it does turn off casual readers.. they'd rather pick up Terry Goodkind or Wheel of Time because it's blatantly obvious what order you read them in and Tor has gone to great lengths to make sure its obvious through the release of boxed sets, coherent formats, and matching covers..

Excellent news. It's certainly been picking up steam in the store I work in (partly because it's on my staff picks shelf), so yay!

Rex: It's not our fault, it's the publishers who decide what books go in what format, and there's no telling when a book will go into a new format - including the new tall size mass market.

In answer to the above question "Which series come close to The Malazaan" there is of cause R.Scott Bakkers "Prince of Nothing" that comes closest to mind. A trilogy that continues to another three books. (Although Jordans first books were highly enjoyable they are not comparable with Eriksons.)