With the Pannion Seer defeated, the Jaghut Tyrant Raest imprisoned and peace declared with the Malazans, the beleaguered citizens of Darujhistan are finally hoping for a time of peace and prosperity. Of course, this is the perfect time for an ancient force of unspeakable evil to escape from the barrows outside the city and unleash a new age of chaos and war across most of Genabackis. This war will draw in the Moranth and the Seguleh, the Rhivi and the remnants of the Malazan armies still stationed on the continent. Far to the south, treasure hunters are looting the crashed ruins of Moon's Spawn, searching for the storied Throne of Night, whilst in another realm hunters are searching for the missing High Mage Tayschrenn at the very Shores of Creation. But the fate of Darujhistan, Genabackis and maybe the world will rest in the hands of one fat thief and a bunch of Malazan deserters who want nothing more than to run their pub in peace. 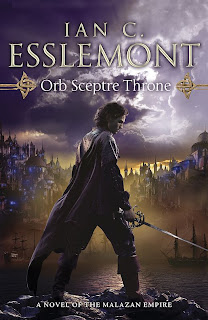 Orb Sceptre Throne is Ian Cameron Esslemont's fourth entry into the Malazan world, expanding on the novels written by his friend and collaborator Steven Erikson. It's an interesting book in that, unlike Esslemont's previous novels which largely focused on new characters, this novel extensively features characters Erikson has used and developed in several previous books, most notably the curiously-dictioned Kruppe. This poses challenges for Esslemont, but thankfully he overcomes them with aplomb. Kruppe occasionally feels a bit off, but most of the other shared characters (Caladan Brood, Duiker, the ex-Bridgeburners, Torvald and Rallick Nom and more) come across very well.

The narrative is, as is typical with Malazan, somewhat disjointed, with several apparently unconnected storylines unfolding before converging at the end. This disconnect seems more pronounced than is normal for Esslemont and is briefly worrying, since he has far less page-time to play around with than Erikson (despite being almost exactly 600 pages long in hardcover, this is the one of the shortest books in the series). However, as the storylines move together and things start making sense, the book picks up a tremendous momentum. The second half of the novel is stuffed full of battles, plot revelations and character moments that are satisfyingly epic. By using elements familiar to readers from other books, Esslemont is able to imbue events with more meaning than would otherwise be the case. When four hundred Seguleh (the sword-wielding taciturn badasses of the Malazan world) show up, the reader knows that some serious carnage is about to go down, for example.

For this reason, Orb Sceptre Throne works much better for established Malazan fans than newcomers, particularly those who have already read Gardens of the Moon, Memories of Ice and Toll the Hounds. A number of plot elements stretching all the way back to Gardens of the Moon are expanded upon and backstory is (finally!) given for the Seguleh, the Moranth and indeed Genabackis as a whole. It's also nice to see some established characters given more depth and bigger roles than previously, such as Antsy, who becomes a major player in events at the crashed Moon's Spawn.

On the negative side, there's a number of story elements that are somewhat obtuse, either referring to storylines still to be detailed or referring very obliquely to events in other novels. Some characters fare better than others, and notably after the initial ferocious power and abilities shown by the antagonists, they seem to be caught a bit flat-footed by the forces arrayed against them at the end of the book. Also, it's confusing why Esslemont alludes to the fact that a fan-favourite character is still in the environs of Darujhistan when that character plays no role in the book (despite events being more than epic enough to attract his attention).

Despite these minor niggles, Orb Sceptre Throne (****½) is a well-written, thoroughly enjoyable addition to the Malazan canon. It is available now in the UK and on 22 May in the USA.
Posted by Adam Whitehead at 15:58

Adam, where would this story fall in the Malazan timeline, then? Around Book 3 or 4, based on your review?

How would you compare this book to the previous Esslemont and Malazan books?

Hi Bill
It is after Toll the Hounds (Erikson #8), and probably before or during The Crippled God.
I found it to be Esslemonts best book so far. Liked very much the Seguleh parts and how a certain important character became involved in that story line. In particular the ending suprised me.

Yup, it takes place during or just before the DoD/CG duology (in fact, at one point the absence of major characters is explained because they are dealing with the situation in Kolanse at the time), roughly also simultaneously with STONEWIELDER (the Korel campaign is cited as a reason Malazan reinforcements will not be sent to Genabackis).

I think that overall STONEWIELDER and OST are similar in quality. STONEWIELDER is probably a bit better-paced throughout, whilst OST is a bit stop-start to get going but once it does, it's excellent. OST has a bit more resonence for expanding on and concluding some of the storylines and elements introduced by Erikson.

"it's excellent. OST has a bit more resonence for expanding on and concluding some of the storylines and elements introduced by Erikson"

It will be really interesting to see how this works, the potential is pretty darn big. I thought Stonewielder was overall a fantastic book, so I see no problem with OST being on the same level.

Please tell me if Karsa is in it? He's my faverite character

I think it's five hundred and some Seguleh, not four hundred, as you said.
**Spoiler Alert**
A clerk counted them as they ran into the city. He came out with 500. Add to that number Lo and Sall who were sent to "Shaolin Temple" to challenge the "Hidden Dragon" and the two Seguleh whom Antsy met.

I've just finished reading TCC, a little late to the party I know, but it, and this review, has whetted my appetite for OST massively!

Without giving too much away, can you answer whether Apsalar is in this book. She was one of my favorite characters who seemed to be on her way to do something, but just never reappeared. I always assumed she would show back up in Esslemont's books and give more closure.

Karsa is alluded to and his presence felt, but is not a major factor in the book.

Apsalar is not in the book. IIRC, she's still in Seven Cities whilst this book focuses on Genabackis.

Arrived in the mail this morning, yip yip!