Humanity is about to launch its first manned mission to another world. Finally, the human race is about to escape its cradle and take its first step towards the stars. But on the eve of the launch the skies over the Earth's major cities are blotted out by the appearance of huge, alien spacecraft. The Overlords have arrived, and nothing will ever be the same again. 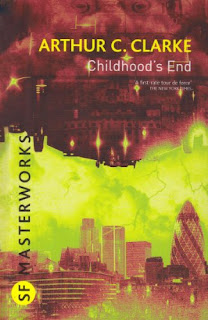 Arthur C. Clarke is one of the most famous writers the science fiction field has ever produced, thanks to his work on the movie 2001: A Space Odyssey and his role as a popular science commentator (he covered several of the Apollo moon landings for American television and had several successful TV series in the 1980s). Clarke's work is notable for its straightforwardness (he was never a great prose stylist) but also its scientific rigour. With a few exceptions, Clarke had little truck with what he considered to be some of the more fantastical concepts of SF (such as faster-than-light travel and artificial gravity) and did not use them in his work. In his view, the universe is vast, timeless and unknowable. Much of Clarke's work is notable for a certain melancholic optimism: the human race can be much more than it is now, but even so is unlikely to challenge the vastness of the universe.

Childhood's End was published in 1953 and was his fourth novel, although his first published in the United States, where it immediately established him as a major voice in the field. In many ways it is atypical Clarke. The aliens are comprehensible and easily relate to human beings, unlike the enigmatic entities of say 2001 or Rendezvous with Rama. At the same time, his normal scientific vigour is a little slacker than normal, as concepts such as telepathy and group consciousnesses are explored (Clarke had a passing fascination with the supernatural at the time, though later firmly rejected such notions). Clarke's influences are clear, with the presence of Olaf Stapledon particularly hard to ignore. 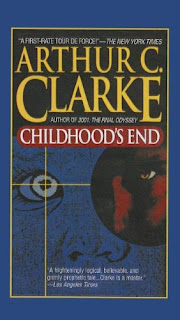 The novel is extremely concise, with my paperback copy clocking in at 160 pages. For its short page count, the novel is fairly epic. It is split into three sections, each with a distinct cast, focus and storyline (unsurprising, as the first section was originally a stand-alone short story). In the first, the Secretary-General of the United Nations has to oversee the painful transformation of humanity from bickering nation-states to a single world government. In the second, a family 'escape' the Overlords' utopia to live in an island commune free of their influence, only to discover the real reason for the Overlords' arrival on Earth. In the final section, a lone human who stowed away aboard an Overlord ship returns to Earth eighty years later (though only a few months later by his count, due to time dilation) to find a world vastly changed from the one he left. Clarke doesn't waste a word as he lets the story unfold inexorably, moving to a conclusion that looms somewhere between awe-inspiring and horrific.

As a novelist, Clarke was much more interested in ideas (thematic, scientific or both) than people. His characterisation was often variable, although Childhood's End is actually one of his better books in that regard. Its major protagonists (even the Overlords) are clearly defined and sympathetic. In terms of structure, Childhood's End is unusual in that the entire story is pre-ordained, and nothing any of the characters do can change what is happening. They - and the reader - can only witness it and make their own minds up about whether it is something that can be called 'good' or not, and I suspect many will fall on the 'not' end of the spectrum.

As a result Childhood's End can be viewed as a colossal tragedy. The book has a tremendous emotional charge as it poses a simple question: how would we face it if our way of existing ended tomorrow? Clarke's answer is surprisingly bleak but, one suspects, one that would be close to the truth.

The novel has aged in some respects. The first edition opened with the USA and USSR battling to land a man on the moon, since Apollo 11 was still sixteen years in the future at the time it was published. Clarke also makes a very dated joke where he discusses how the Overlords have to force the rulers of South Africa to treat all their citizens equally regardless of skin colour. The 'joke' is that by this time majority rule in South Africa has been restored, and it's the white population that's being mistreated. An amusing aside in 1953 actually feels rather cynical today, assuming as it does that the African population would be as racist and authoritarian as the white one was. However, another point about how the people of Israel bitterly resist being absorbed into the Overlords' hegemony and giving up the freedom they have spent centuries fighting for, is more resonant. There's also a recurring problem in Clarke's work where he underestimates the power of religion, and the sequences where the Overlords' arrival causes the downfall of all world religions in a matter of months are rather unconvincing.

In most respects, Childhood's End (****½) has not aged badly at all, and its central themes of parenthood and the futility of railing against the night - but the effort nevertheless being laudable - remain interesting. The novel is available now in the UK and USA.
Posted by Adam Whitehead at 20:09