Details for UK pb split of A DANCE WITH DRAGONS

In their latest catalogue, HarperVoyager have confirmed the titles for the two-volume paperback edition of A Dance with Dragons. 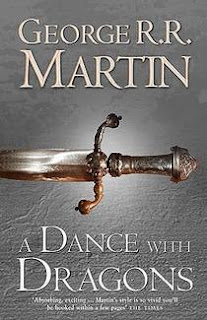 Part 1 will be called Dreams and Dust whilst Part 2 will be titled After the Feast. Part 1 will use the one-volume hardcover art, whilst Part 2 will use a new image of a sword hilt (similar to the unused art above, but with a different hilt design). Both will be published on 29 March 2012. Somewhat bizarrely, the two parts will also be printed as ebooks, although the one-volume ebook will (presumably) remain available.

This is not the first time a Song of Ice and Fire novel has been split for UK paperback publication. A Storm of Swords was released in two volumes in 2001, subtitled Steel and Snow and Blood and Gold respectively.
Posted by Adam Whitehead at 23:13

Not sure if you are aware of this or not but HC Aus have sold-in a single volume paperback edition (976 pages) as well as the split to me.

Silly. They should have split it by character. How pissed are readers going to be when they go to the grocery store, buy the new GRRM and only get half a story?

Cool, thanks for the info! Planning a reread once I get hold of these babies.