I'll skip my usual plot summary, as doing so would cause me to lose the will to live. Suffice to say, Your Highness is a stoner comedy where brothers Danny McBride and James Franco have to team up to take on the evil wizard (Justin Theroux) in order to save the kidnapped Zooey Deschanel. A bewildered Natalie Portman helps out for a bit. Suffice to say the good guys win. 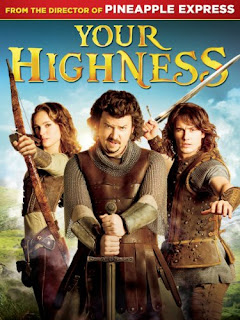 Your Highness is a movie that catastrophically fails on numerous levels. First up, it's a stoner comedy which is trying to make the 'add marijuana use to any given scene to make it using' formulae still work. The conceit here is that the film is a high fantasy, so characters breaking out weed whilst on a quest to save the world (or at least the female lead's virginity) is supposed to be tonally jarring and hence amusing. The problem, of course, is that even the serious Lord of the Rings movies had weed jokes in them, so this doesn't really work.

Secondly, the film's leads are rather unlikeable. Danny McBride (also the film's writer) plays Danny McBride, the quintessential supporting man who is best-deployed in short bursts (he worked quite well blowing up an entire jungle in Tropic Thunder and then doing nothing else of note in the film). He can't handle the lead role for an entire movie, and his jokes become repetitive and fall flat. He has occasional moments of competence, but no more. Worse is Franco, who plays his flamboyant, heroic role with all the charisma of a wet blanket, not to mention adopting a bizarre nasal accent that is seriously annoying. Completing a trio of ineptness, Deschanel plays her role as if she is severely concussed for the whole movie, a curious choice from someone who is actually a very good actress.

Supporting actors fare better: Theroux's ferocious, scenery-chewing performance is just what the script calls for and he makes even the most tired gross-out gags amusing. He also gets the best lines. It's therefore a shame he gets relatively little screen-time. Charles Dance, playing the brothers' fierce, authoritarian father (trivia: he was recruited straight from the set of Your Highness to play Tywin Lannister in Game of Thrones), also succeeds by playing his role straight. But again, he's in the film for only a limited period. Portman is more variable, in some scenes phoning it in and in others at least trying to get into the spirit of things. Portman went straight from filming Your Highness to principal photography on Black Swan, which I suspect was a tonal shift so jarring it caused whiplash.

We must take a brief moment to salute Toby Jones, an excellent and interesting actor who in Your Highness has to utterly humiliate himself several times over in the pursuit of McBride's comedic vision, and does so without at any time descending into a towering rage and murdering his co-star with a chainsaw. Such restraint can only be marvelled at.

Another major failing of the film is that it seems to draw inspiration from other, superior movies. When a film is making you think of The Princess Bride, Lord of the Rings or Krull, it's probably not a good idea for the film not to be a patch on any of them.

Your Highness (½ a star and lucky to get that) is not particularly fantastical (having a paedophile muppet wizard doesn't count), definitely not original, is mostly utterly unfunny (some honourable exceptions for Theroux) and almost everyone involved seems to be rather embarrassed by the project. The studio certainly was, sitting on it for more than a year before finally trotting it out somewhat sheepishly to the cinemas, where it promptly bombed. Definitely one to avoid.
Posted by Adam Whitehead at 21:03

Email ThisBlogThis!Share to TwitterShare to FacebookShare to Pinterest
Labels: your highness

I was (un)fortunate enough to choose this as a present from my great grandad for Christmas. I was promptly disappointed.

The thing is... it could have been funny if it had released five years ago. There was a period of stoner films - Dude, Where's My Car?, the Scary Movie films and so on, and Your Highness would perhaps have been better then. Instead, it came about too late - way too late, in fact. It could have done fairly well a number of years ago, but everyone's moved on since then.

As for Zooey; her... dumbfoundedness was supposed to be part of her character. But I honestly felt sorry for her, because she was in such a terrible film. Natalie Portman wasn't much different, either. She is a good actress, but was definitely let down by... everything.

It did have a few moments of genuine hilarity, but largely the humour was forced and just... bizarre.

If you want to see this film, go and watch the trailer on YouTube. That's all you need to see. The rest is dire.

I thought the trailer for the movie has one of the funniest things I seen in a long time. My finacee and I couldn't wait to see it... and even as excited as we were it got hard to sit in the theater after awhile. Also sucked that one of my favorite lines from the trailer wasn't in the film. That was a bummer.

Hmm I didn't think it was THAT bad!

Very disappointing film, especially as Danny McBride's HBO comedy 'Eastbound and Down' is very very good indeed and you should all track down now on DVD, before season 3 starts shortly.

And the Charles Dance connection isn't the only one with Game of Thrones. They used the evil wizards throne room as the Eyrie, fact fans!

Forgettable movie but it does deserve an Oscar for "Best Natalie Portman in a thong" scene.

Any film with a 'Fuckening'in it is a rare tour de force of comic genius in my book. Mind you I also found Airplane II a riot so what do I know?

Airplane II does have a Shatner on fine form in it though, which makes up for deficiencies elsewhere.

I suppose the upside is that we got to read this really amusing review. I don't think I've ever read a description that said an actor seemed concussed-- I would steal that but I doubt I could pull it off so well.

Thought it was pretty entertaining. His attempts to saw the Minotaur's horn off that fail and see him wearing its, well, horn was entertaining. Enjoyable in a completely OTT way IMHO.

Well, at least the money that went into making this film wasn't completely wasted, since the sets in the Paint Hall were re-used for Game of Thrones.

Wertzone with teeth and bite - I love it!