Conan, the young son of the barbarian chieftain Corin, witnesses the destruction of his home village and the murder of his father by the warlord Khalar Zym. Years later, having grown into a skilled and resourceful warrior, thief and pirate, Conan bumps into one of Zym's minions and follows the trail back to Zym himself. Zym is trying to resurrect his dead wife and unleash a series of events that will turn him into a god, so Conan sets himself against Zym's plans, against overwhelming odds. 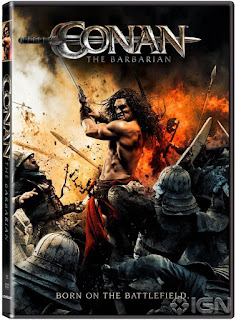 Robert E. Howard's signature character, Conan the Barbarian, is one of the most important and influential characters in modern fantasy fiction. A brooding warrior from the north, a barbarian of inventive cunning, Conan is the archetype for every big, burly warrior fantasy has produced since. Unfortunately, he's not been well-served by film adaptations. John Milius' 1982 movie starring Arnold Schwarzenegger is admirable on many levels, but its depiction of Conan (particularly his tendency to look freaked out and bellow "Crom!" every time he encountered magic) was very much at odds with the original source material.

The latest take on the character was described during production as an attempt to get back to the Robert E. Howard short stories. In particular, actor Jason Momoa refused to watch the Schwarzenegger movies whilst binging on the Howard shorts. This was a laudable ambition, but unfortunately the movie as produced falls far short of being a fitting homage to the Howard Conan.

The film's first misstep is giving us - like the 1982 movie - some kind of tedious origin story for Conan in which his family is butchered by the main bad guy, whom Conan spends years searching for. The idea seems to be to give Conan a personal stake in defeating the enemy (whether James Earl Jones's Thulsa Doom in the original movie or Stephen Lang's Khalar Zym this time around), but this seems unnecessary. Simply having Conan bump into the bad guy's plan and oppose him for some less melodramatic reason (he's after Zym's gold, or finds his ambitions offensive, or simply has a whim to stop him) would be more in keeping with Howard, and would also have the benefit of being less cheesy and cliched.

This opening sequence of the film is pretty poor, with a badly-choreographed major battle sequence and rather feeble character development. The scene where the young Conan wipes out a band of marauders is pretty good, but everything else about this sequence disappoints. After this we get some scenes which are actually pretty decent. Jason Momoa is actually very good as the adult Conan, moving and looking much more like the Howard character than Schwarzenegger ever did. The film notes that Conan has a more varied CV than just 'brawling warrior' and shows his thievery skills and even his part-time job as a pirate in action. There's even a few shout-outs to Conan's literary adventures which are entertaining. This middle sequence of the film also features its stand-out action beat, a confrontation between Conan and Zym with sorcerous warriors made of sand joining the battle and is actually very entertaining.

Unfortunately, it's mostly downhill from there. The film's somewhat shaky grasp on plot logic begins to disappear in the second half and the fight choreography goes to hell, with poor editing making scenes comes across as nonsensical and random. A particularly promising fight with a giant squid monster is undermined by this problem, and the final confrontation between Zym and Conan is wrecked by it. The development of the characters also gets tossed aside. The revelation that Zym is motivated by the murder of his wife threatens to give depth to the villain until the writers also reveal that his wife was a deranged witch trying to destroy the world, which reduces Zym to simple 'evil madman' status. Rachel Nichols's Tamara initially appears to be an individual character with her own motivations and goals (noting that she is no man's plaything, not even Conan's), but this is chucked out ten minutes after she turns up, with her predictably falling in love with Conan and then becoming no more than window-dressing. Nonso Anozie's pirate captain Artus is a hugely enjoyable character who promptly disappears halfway through the movie for no real reason.

What makes Conan the Barbarian (**) all the more depressing is that the ingredients are sound. Stephen Lang can be a great villain, as we saw in Avatar, but is under-used here. Jason Momoa is a great Conan and emerges from the film with his go-to SF/fantasy warrior credentials (earned in Stargate: Atlantis and Game of Thrones) intact. Some of the action sequences are good and some of the ideas are okay. But the direction is pedestrian, dialogue is often risible, characterisation is almost non-existent and the editing totally inept at times. Not totally without merit, but mostly a failure. The film is available now on DVD (UK, USA) and Blu-Ray (UK, USA).
Posted by Adam Whitehead at 18:27

I agree, and they should have let Jason let the woman go on the bridge!

I was happy that Jason was not the thing that failed in this movie. I hope it doesn't negatively affect his career. He really is a very nice guy.

While the 1982 version isn't exactly true to the Howard stories, I thought it was great. A fantastic example of music telling the story. I don't think I'll even watch this version, given all the negatives I've heard about it.

Yeah, I met Jason at a press junket for the film (my first and only such experience of such a thing) and he's a cool dude. He arm-wrestled one of the other bloggers present into submission after asking too many questions comparing him to Arnie :-)