What's up with HALF-LIFE 3?

The non-appearance of the next game in the Half-Life series has become a bit of a running joke in the gaming community over the past few years, but in the last few months slivers of evidence have started mounting up that Valve are close to some sort of announcement about the future of the franchise. However, a recent comment by a Valve employee seemed designed to end such speculation, hinting that any announcement about the game is still some way off. Rock Paper Shotgun has highlighted some of the problems gamers are having with Valve over the issue. 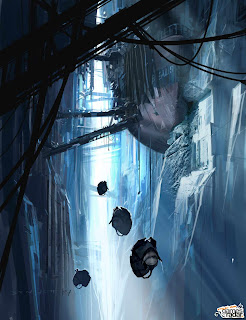 The Half-Life series is frequently cited as the best first-person shooter series of all time, notable for its focus on atmosphere, immersion and puzzle-solving as well as combat. The series is also one of the most commercially successful video game series of all time, with more than 20 million copies sold since 1998, and has an immense number of fans.

Premise
The series charts the adventures of Gordon Freeman, a scientist at the Black Mesa Research Facility. An accident at the facility results in alien creatures from the planet Xen invading the facility. Freeman, armoured in an experimental Hazardous Environment Suit, is able to halt the invasion and destroy the alien controller, the Nihilanth. His skills are noted by the mysterious 'G-Man', who initially appears to be a shadowy government inspector but is ultimately revealed to be some kind of non-human (or possibly post-human) intelligence with formidable powers over time and space. He 'stores' Freeman and reawakens him ten years later to deal with a new crisis.

By this time Earth has been invaded and occupied by the Combine, an interdimensional alien race whose attention was drawn to Earth by the original Black Mesa incident. Freeman joins the Resistance, including some old colleagues from Black Mesa, and is able to help disrupt the Combine's control of Earth by destroying the Citadel, the Combine base of operations in City 17 in Eastern Europe. This prevents reinforcements from reaching the planet. However, in the finale to Episode 2, as the Resistance meet to discuss their next move the Combine attack in force and kill several key members. At the same time, several Resistance members run into trouble whilst investigating the Borealis, an Aperture Science vessel which holds some impressive technology on board (Aperture Science is the company which plays a key role in the Portal subfranchise, and is Black Mesa's sworn rival). The game ends at that point.

What next?
Originally, Episode 2 was going to be followed by Episode 3, which would conclude the Half-Life storyline. Additional games set in the same universe, possibly developed by outside teams like Opposing Force and Blue Shift, would still be possible, but Episode 3 would answer most of the remaining questions in the franchise. Based on the 18-month development time of the previous episodes, it was assumed that Episode 3 would be released in mid-2009. However, as time wore on and that date came and went, Valve seemed reluctant to mention the game. They instead released several completely different titles: Left 4 Dead (2008), Left 4 Dead 2 (2009), Alien Swarm (2010) and Portal 2 (2011), with Dota 2 and Counter-Strike: Global Offensive planned for release in 2012.

Valve's way of working is highly unusual, with the company consisting of a large number of people who agree to work on projects by consensus. Newell is the head of the company and its main spokesman, but also chooses not to exercise executive control, preferring to let his team work on projects that excite them. The end credits on Valve games notably do not identify the 'jobs' that people have on the games, simply listing everyone involved by name and that's it. A more formal structure appears to have existed at one point. During the development of the first two Episodes it was suggested in the press that Valve had one team working on Episode 1 and another on Episode 2, and that when the Ep 1 team finished their work they moved into working on Episode 3. It's likely that the concept art released for Episode 3 (constituting just about the only hard information we have on the game) was created around this time. Subsequently it appears that Valve has pursued several projects simultaneously and 'focusing' only to bring a project to completion and shipping.

What now?
That Valve's focus has moved away from the Half-Life franchise is not surprising. Some of the people at Valve were working on the Half-Life brand non-stop from 1996 to 2007, which is a long time to spend in one universe. Moving on to other projects, even tangentially related ones like the two Portal games, appears to be an important way of recharging the creative batteries. I also don't doubt that Valve have thrown around ideas, maybe put together some demos and things, for the next Half-Life game. The suggestion that Episode 3 or Half-Life 3 has been in full development behind-the-scenes at Valve for the past five years and could be released in 2012-13 seems very fanciful given their other projects, however (though if that turned out to be true, it would be great and Valve does have form on this).

However, by ending Episode 2 on huge, multiple cliffhangers and then saying that Episode 3 would follow (even if it would take longer than Episode 2), Valve did make a commitment to fans that the story would be concluded. The timescale is unimportant. If Valve said that the next game was a full decade away, that would be fine, but some kind of additional communication over the matter would be helpful. There are signs of hope: Portal 2 featured an Easter Egg in which the player stumbles across the drydock for the Borealis (the ship that will play a large role in the next game, whatever and whenever that is, based on Episode 2), which at least confirms that the next Half-Life game has not been forgotten about.

Hopefully the current wave of discussion will get a bit more information from Valve about what's going on with their most popular franchise.
Posted by Adam Whitehead at 11:55

So it seems HL3 has been inflicted with the ADWD curse. How sad.

I think it's more the Captal's Tower curse: mentioning it's on its way, then not talking about it at all, then releasing a whole load of other stuff that is unrelated (but might be good on its own merits), sound a bit antsy when asked about it, and then clamming up altogether.

The comparison with ADWD I think mostly fails because Martin at least provided updates on the project. Maybe only a couple of times a year, but generally there was some hard info to go on. With HL3/Ep3, there's been no substantive news since the release of the concept art back in 2008.

However, something that I think most people would be very happy with is if the wait was the same: a six-year wait for HL3 would mean it would be released in 2013, which isn't too bad at this stage.

It's been almost 15 years since Mageborn traitor.... Still waiting for Captal's tower.

Hoping that Valve doesn't take quite so long.