The Black Company is an elite mercenary force whose history goes back centuries. Last of the Free Companies of Khatovar, the Black Company fights for coin, but is also a proud army that is its own master. Accepting the commission of the Northern Empire and its ruler, the ruthless Lady, the Company soon finds itself fighting a war against an oppressed populace struggling to be free...but the leaders of the rebellion seem every bit as ruthless and amoral as the Lady and her senior sorcerer-warriors - the Taken - are. Evil battles evil, a continent bleeds and through it all the Black Company struggles to survive. 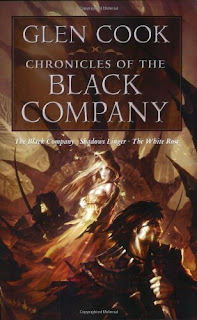 Glen Cook's Black Company books are widely regarded as being amongst the most influential and important epic fantasy novels ever written. Steven Erikson cites them as the primary influence on his Malazan series, whilst George R.R. Martin is a fan. A dozen years before Martin made 'grimdark' cool, Cook was already writing adult stories about wars, soldiers and the causes they fight and die for, with no elves in sight and no punches pulled.

Published in 1984, The Black Company is an object lesson in how to write a large-scale epic fantasy and execute it with razor-sharp focus and nuanced characterisation, and to do so in a relatively modest page count. More happens in The Black Company's 300-odd pages than in many entire trilogies. Empires rise and fall, battles that make the Pelennor look like a playground scrap are fought and all is seen from the point of view of a single medic and historian, who is all to often drawn in to become part of the events he is trying to dispassionately record.

The book is episodic, with each (very long) chapter relating a different incident during the war. As the Lady's empire battles the Rebel, so the different Taken feud amongst themselves and the Black Company are caught up in one of the exchanges (but don't exactly get much gratitude for taking sides), giving the conflict an air of complexity and extremely conflicted morals. This is emphasised by the addition to the Company of its first native northern soldier, Raven, who has his own agenda. Given that we are with the POV of Croaker, the medic, for the entire novel, Cook achieves an impressive depth of characterisation of the other principals. Other well-developed characters include the old, feuding mages One-Eye and Goblin, Raven and his mute ward, Darling, and the Taken Soulcatcher, who may be a servant of darkness but even he needs to unwind and chew the fat from time to time. 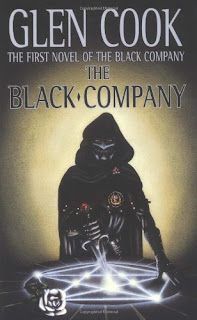 The prose is clipped and efficient, though some criticise it for being blunt. Cook skips descriptors in some sentences, or uses a soldier-style shorthand designed to transmit information with maximum efficiency and conciseness on the battlefield. It can be a little odd at first, but once you get into the author's headspace it becomes second nature, and a marvellously effective way of telling a large, epic story in a constrained space.

Problems? The absence of a map makes the geography of the war (which is critical to the plot) sometimes a little confusing. With one exception, we really don't get to know anyone on the side of the Rebel, making them a somewhat faceless and uninteresting foe. Cook also prefers to avoid exposition, starting in media res and pausing for explanations only rarely. However, unlike Erikson (who employs a similar device at the start of the Malazan sequence) Cook's story is actually pretty straightforward, and by the end of the novel the reader should have pieced together everything pretty nicely.

The Black Company (****½) is a novel brimming with verve, confidence and attitude. As fresh and readable today as when it was published a quarter-century ago, it's a stellar opening to the Black Company series. The novel is available now in the UK and USA as part of the Chronicles of the Black Company omnibus (along with its immediate sequels, Shadows Linger and The White Rose).
Posted by Adam Whitehead at 18:35

I replaced my AWOL copy of the Black Company with the omnibus edition some time ago, but have yet to read Shadows Linger and The White Rose. I too enjoyed the Black Company so thanks for the reminder to pick it up sometime soon.

I wonder if the absence of a map is cheapness/laziness or might be tied into the narrative form. That is, we see things from Croaker's POV and Croaker doesn't know everything. Instead of a bird's-eye view of the action, we get a boots-on-the-ground eye view--so why should we get a map? So the lack of description and the confusion (both narrative and geographical) are part of the same effect.

Thanks for introducing The Raven to a new crop of readers and bringing up some good memories of one of my all time favorites. I really loved this series and I think Cook's writing gets even better as the series progresses.

Interesting point on the map, although Croaker does actually have access to the company's maps (and he and the Captain have a conversation in the second book over a map) so the prescence of a map would still make sense even given the 'ground level view' that is part of the effect Cook is going for.

I suspect Cook just wanted freedom of action to bring in new features as necessary and not be limited to something he drew many years earlier.

This is without a doubt one of my favorite series.

The first and only map I've seen for it was in Green Ronin's Black Company OGL game. It's um ... a kinda boring map. But it may work for some reference.

This book is great, probably the most epic 300 page book I have ever read. To me this is one of the great series of the genre.

I had mixed reactions to this book. I did like that it covered so much ground and spent a lot of time on the characters, but at the same time, the occasional lack of subtext began to grate, and it felt episodic to the point that I wondered if it had been written as a serial. Later on (as I recall -- it's been a while) the author seemed to be re-introducing (or re-describing) the characters every chapter or so, even though we'd been with them the entire time. Also, I started to feel like the author was actually afraid to describe violence -- when he'd spend 4-5 pages describing a card game and then 2 sentences on a brawl afterward. It's definitely a different take on this genre, but I didn't feel it was as successful (as a piece of writing) as it could have been.

Ha, I like the idea of Cook leaving out a map so as to increase his later freedom.

BUT, I should add, I have some mixed feelings about this book. You know Le Guin's essay, "From Elfland to Poughkeepsie" (iirc)? She says that modern fantasy writers can mess up in two ways: by copying Dunsany too closely (we'd probably say Dunsany or Tolkien) or by writing as if they were reporting on Poughkeepsie's union issues. I kind of dig Cook playing around with the mercenaries's view of the Standard Fantasy War. But I sometimes feel like it's too Poughkeepsian. Or maybe that's the point?

Loved Black Company too. How is Dread Empire? Never dove into that one but it looks like it's finally coming to a conclusion.

I read the first two omnibus editions but not yet the last two due to mixed feedback. Any thoughts?

do you have any info on 'A Pitiless Rain' and 'Port of Shadows', the two final Black Company novels?

Cook has mentioned them at least as early as January 2005, when he said in an interview that he has "a bunch of other stuff [he has] to do first that's under contract. It will be several years before a new Black Company novel comes out."

With the concluding (?) Dread Empire novel 'A Path to Coldness of Heart' finally done, it might be only the fourth novel of his Instrumentalities of the Night series that's in the way, I hope!

I'm also wondering if the two BC short stories will be collected (maybe together with further BC stories?) sometime down the road. Would be nice.

If you enjoyed the first 2 omnibus editions, you will enjoy the rest of the Black Company novels.
Dread Empire series takes a while to get your head around, but once you do it is a great read. Just finished the series.
I'd also recommend the Garrett PI novels. Sam Spade meets Tolkien and just plain fun to read.
Haven't read any of the Instrumentalities novels. How are they?

the two short stories that have been released in the collections are two chapters of the new black company novel that he is working on. this new novel will take place between book 1 and book 2.

as to glossing over the violence... the narrator croaker says something to this in regards to not wanting to paint a picture one way or another... rape, pillaging, sacking a city, all involve these behaviors and he did not want to paint "his family" members as villains.

No Map. the reason for no map is to allow readers to use their imagination. there are places in the book where people will mention distances between places and the number will not always match... this is because of the different ways each group or culture equate distance. it basically does not tie down the author to a specific map but more importantly it allows the reader to picture it themselves.

also in regards to the map.. there is a D20 Black Company rulebook and it too does not include the map for this reason (though it has pretty much everything else). personally for me I actually tend to not bother with maps anymore in my readings (elizabeth moons books, GRRMs books) etc.

I hope this helps a little. all this information can be found and confirmed in the various interviews posted on the internet.

The D20 RPG does have a map. It was online a while ago but got pulled, I'll see if I can find another image of it.